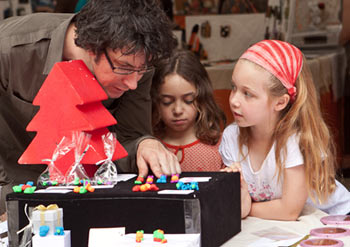 Entrepreneurs are getting younger and younger – it seems every second day there’s a news story of a school kid who’s developed a multi-million dollar smartphone app.

But are these kids rare, freakishly gifted prodigies? Or should the start-up space get used to kids playing in their park?

Wendy Wilson has been closely involved in an initiative called Club Kidpreneur, which teaches primary school-aged children about how to set up a business.

By the middle of the year, more than 300 kids will have completed the Club Kidpreneur program, which was originally established by entrepreneur Creel Price, who set up his first business at age 11, selling strawberries from his family’s farm.

Wilson explains Price’s vision for the club is to encourage kids to use their creativity to start enterprises that make a contribution to the world.

She says the program is about “giving kids the resources and skills to fix problems and the ability to feel in control of their future.”

Club Kidpreneur was founded in Sydney, but will soon be extended to Melbourne and Maroochydore on Queensland’s Sunshine Coast.

It’s centred on an after-school program that children attend once a week for eight weeks and follows a three-step program to learn how to run a business.

“We’re trying to bring out kids’ inner entrepreneurial skills and teach them about success and failure and that it’s okay to fail,” explains Wilson.

During the program, kids come up with a business idea – Wilson says lemonade stalls and cake making businesses have been popular – and develop a business name and logo.

They also learn how to put the business together – for example where to buy ingredients like eggs and how to make the cakes.

At the culmination of the program the children sell their wares at a market stall. One hundred kids participated in the CarriageWorks Artisans Market last December and this Easter, learning skills like how to deal with customers and handle money.

Wilson says there are plans to extend the program across Australia and into the US.

One young Australian entrepreneur who has first-hand experience developing a business from the ground up is 16-year-old Sergei Krjatian, who started his online, custom-made woodwork business when he was 15.

After learning woodwork in the first year of high school and continuing to create wooden items during his free time, Krjatian drew on his brother’s expertise to build a website to showcase his designs.

“I got my first customer when I was 15 after the site being live for four months,” says Krjatian, who explains that his first customer wanted him to custom-build a bedside table.

Krjatian’s current focus is “reselling new auxiliary cables on eBay, but my longer term vision is to build the Serg brand by expanding it into many different industries.”

As a young entrepreneur, Serge says he has an advantage because, “I’m flexible and open to hearing ideas from more experienced people that I can use to reach my dreams and goals.”

Another young entrepreneur is 18-year-old Daniel Brusilovsky, the founder and CEO of Teens in Tech Labs, who is based in Palo Alto in the US.

Brusilovsky started his first business in 2006 at the age of 13. Not surprisingly, he thinks being based in Silicon Valley is an advantage as a young entrepreneur.