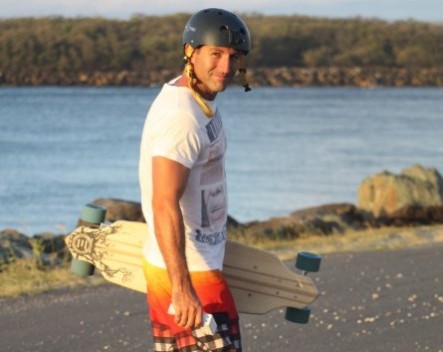 Jeff and Fleur Anning weren’t planning on launching an international business when they designed their motorised skateboard.

But after fielding hundreds of questions from friends, major brands and interested parties overseas, they decided to go for it.

Evolve Skateboards was launched by the Annings in early 2012. The couple, based on the Gold Coast, released their first run of skateboards in July 2012, and have signed up nine international distributors.

“I’m not really into skateboarding so much, this is more about snowboarding or surfing,” Jeff says. “But I saw an electric board go past and thought to myself this was the best idea ever. I want to carve without pushing, and this is the perfect way to get that.”

Jeff, who was a landscaper at the time, bought a board, but was disappointed at what he saw as the unnecessarily heavy and low quality of the options.

“I set out to improve the way these boards ride. It became a challenge and obsession,” Jeff says. “My intention was never to launch an international company, I wanted to make a cool product and challenge myself and it turns out it was a winner.”

Jeff and Fleur, a graphic designer by trade, spent a few months creating and testing prototypes, sourcing parts from all over the world and assembling the boards themselves.

They created a couple of YouTube videos and launched a website; pre-orders and email inquiries rolled in from all over the world.

Shortly after they launched, they were approached by a major skateboard company keen to license the product.

“We worked on that idea and partnership for about a year,” Fleur says. “We got to the point where it wasn’t moving along. It was all about bottom dollar. They wanted cheaper parts and we decided that wasn’t how we wanted to go.”

When Jeff and Fleur chose to walk away from the deal, they realised their commitment to quality was going to cost them. They needed capital to sell the boards on their own, so they decided to sell their home.

“It was a big risk. To get this to market, we needed investment we didn’t have. We only had money tied up in our house, so we decided ‘stuff it, life’s short let’s take a risk’ and sold our place,” Jeff says. “But walking away from the deal was the best thing that happened to us.”

While bootstrapping meant they had to produce and sell small runs, Fleur says this helped them develop the best possible model as they could make improvements every 50 or 100 boards.

“We started the company by the skin of our teeth, so we had to do it slowly but it’s been the best way to get the product right,” Fleur says.

They’re now selling thousands of boards a year and are distributing to nine countries. Jeff says the model is they sell the parts and prototype to the international sellers, who then assemble the boards themselves and sell them as their own business.

“We’ve done it this way to ensure quality and ownership,” Jeff says, adding while demand is growing, they’re sticking with their current system. “We’re not going to go into retail. At this stage, we’re not going to change anything.”

Fleur says their target customer was different to what they anticipated, with their main demographic being 28-to-55-year-old professionals looking for a fast and fun way to commute to work.