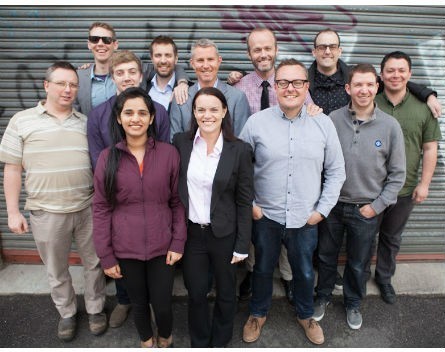 Money20/20 is the hottest fintech event on the planet. Since launching in 2012 it has grown more than 500% to become the veritable ‘Burning Man’ of financial services and payments, where the world’s biggest players and startups collide on the edge of the Nevada desert.

For three days Las Vegas is transformed into “Fin City” as CEOs, founders, developers and venture capitalists rub shoulders, sign deals, size up competitors and scope out new technologies all while trying to catch the latest trends in fintech.

Last week one of my co-founders and I joined that circus, along with a core team all flying in from Melbourne, San Francisco and St Louis. We also brought a couple of our customers along for the ride. We even brought them along to our competitor’s drinks night (they were impressed with our confidence).

After a week of what felt like being inside a tornado, we’ve come out the other side committed to returning to next year, and hopefully along with a number of other Australian startups.

What Money20/20 taught us more than anything is we’re playing in a huge market with big stakes. To win we need to learn from the best, and test ourselves against the best. And we have come back with the confidence that we’re onto something, but we were only able to know that from some serious planning, heavy partying and a bit of luck.

We went to the conference thinking our greatest learnings would come from speakers like the CEOs of PayPal, Chase, Khosla Ventures and Nasdaq or the head of payments for Facebook. But we learned a lot more from the 18 meetings we had with potential partners, customers and even partial competitors.

For anyone considering going in the future, I offer these seven simple rules for survival:

Most people lock in their meetings well in advance, so if you want to get on their schedule get in early. Anyone and everyone you want to see is there, so draw up your list and prioritise them, then get to them way ahead of the event.

2) Be ruthless with meetings

There’s a theory that says a maximum of 13 meetings a week is optimal. When you draw up your prioritized list, work through them rigorously and don’t let the C-list bump out the A-listers. We had to cull our list down from 50.

Forget trying to settle into US time. It’s best to stay up late every night and sleep in the morning. More deals are done between 8pm and 2am than between 7am and 10am (in Vegas anyway) so use your jet lag to your advantage.

Take advantage of as many networking chats on the floor as you can – this is where the real content is. Deals, partnerships and networking are also done over coffee, lunch, dinner, or after-dinner drinks.

If you stay in the same casino as the event it is likely that you won’t see daylight for days.

6) Take notes: The payments world is moving fast, so for those in it, here are our takeaways from the past week:

Everyone is trying to replicate the Uber experience, where at the end of a trip, you simply get out and walk away, without ever reaching into your pockets. Invisible payments is taking the final friction out of service experiences, changing the payment from a card swipe or payment page to an automated, back-end process.

It’s a land grab for market share – whether you’re looking to innovate or not, the quickest business wins, and that’s usually through integration rather than self-building. This is why everyone in both B2C and B2B payments is pumping up their APIs.

There’s only so many seats at the table. The biggest players recognise this and are gobbling up new entrants to further their missions. Case in point is Chase buying MCX and rolling it into ChasePay. Visa, MasterCard, Apple, Android, and Samsung are all on notice that they have a war chest available to go head to head with a new private label solution.

Everyone is focused on the user experience

No one wakes up thinking about payments, but they sure as hell notice a bad experience. Thousands of companies are focused on taking friction away from the process.

As every football captain says in the lead up to the finals, we want to test ourselves against the best and see where we stand. After spending a week at Money20/20 I can say we’ve just done that, and I would encourage others to do the same. But like any good footy team, don’t turn up unprepared.

Simon Lee is co-founder and CEO of PromisePay, the fully managed payments platform for marketplaces and online platforms