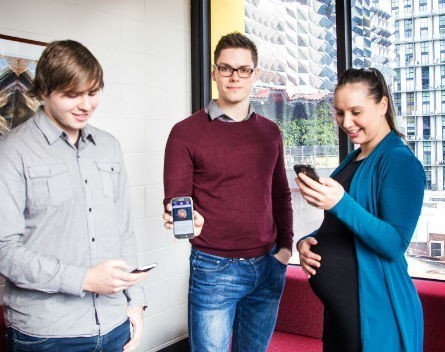 An app developed by two university students that aims to ease concerns and answer the many questions faced by first-time parents has hit over half a million downloads.

The First Time Pregnancy app allows parents to track the journey from embryo to newborn baby with images and ultrasounds, as well as tailored information from medical experts.

It was developed by amii Solutions, a startup founded by RMIT University students Michael MacRae and Henry Bezuidenhout in their final year of studying information technology in 2013, in partnership with a medical professional.

MacRae says he was contacted by a doctor who runs a pregnancy blog to develop a mobile site, but the idea for the app eventually emerged.

“From there we worked as a joint venture and never looked back,” MacRae says.

First Time Pregnancy provides support and guidance for first-time mothers by illustrating how the foetus is developing throughout the pre-natal period.

Users simply enter the expected due date of the baby and will then receive notifications detailing what sort of things to expect and when, including “milestone alerts” of important events like the first heartbeat. The startup works closely with medical professionals to ensure the information provided is accurate.

“There’s week-by-week information about the growth of the baby, what sicknesses and symptoms you might experience, and what’s normal,” MacRae says. “It’s all very illustrative, and if you want to read more, it links back to the website.”

The app’s progression has been a slow-burn, MacRae says, but it now gets more than 1000 downloads per day on the Google Play store.

“It’s not one of those viral apps. It took some time to really get the ball rolling,” MacRae says. “It didn’t have a peak and then go down again; it just continued to accumulate more and more users. I guess that’s something quite special.”

The pair has monetised the app through showing one full-screen advertisement each visit, and MacRae says this has been the most difficult aspect of the project.

“We don’t want to annoy people too much,” he says. “People like the app but of course they don’t like the advertising. But that’s really only one way to monetize it.”

Their app store rating dropped after ads were introduced, but has steadily climbed back up. First Time Pregnancy is now profitable, with an ad-free version available for $0.99. It’s the first startup venture for the pair, who are yet to raise any external funding.

“We fund ourselves and our other projects,” MacRae says. “Ninety percent of what we did was self-taught from the internet and YouTube.”

Although there are many other apps focusing on pregnancy, MacRae says their startup is unique because of its personalisation and timeline feature.

“The difference is that most other apps are a gathering of information, rather than being focused on what stage of pregnancy you’re at,” he says.

The app is only available on Android smartphones at the moment, but MacRae is working with other RMIT students to develop an iOS version.