Five entrepreneurial lessons from 99 Wuxian chief executive, Amalisia Zhang, who convinced the world’s biggest banks to back her 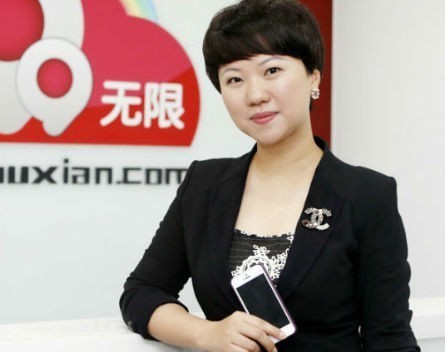 Amalisia Zhang, chief executive of ASX-listed Chinese mobile commerce platform 99 Wuxian, has persuaded the chief executives of nine out of ten of China’s top banks – four of whom are the largest banks in the world – to back her company.

But she admits as female leader in a male dominated industry, it hasn’t been an easy road to success.

“Sometimes [it is] harder for women to prove themselves,” Zhang tells SmartCompany.

“Sometime you knock at the door, it’s a meeting room full of [men]. They might be a little easier on you in the very beginning, [but] of course the hard part they might ask is, OK, [you’re] a woman [in] technology and financial services. Can you deliver?”

But Zhang has certainly proved she can deliver, as the boss of the third largest m-commerce player, by total transaction volume, in the most populous nation in the world.

The $27.7 million company operates a business to business online marketplace, connecting banks and other financial institutions to business customers through various smartphones services, such as reward point programs.

After launching the platform in 2012, marketing a “Chinese Paypal platform on steroids”, Zhang listed the company Australian Stock Exchange in October 2013.

With one foot in both the Chinese and Australian markets, Zhang says she has noticed many Australian small businesses are not aware of the opportunities available to them in China.

“There is big opportunities for manufacturers, or small to medium business owners,” she says.

“Australia is big country, but in terms of population China is bigger. A lot of good products in Australia are so popular with the Chinese consumers, like healthy products, milk product, wine, organic food products. [These companies] would be a very good business in China.”

“[Business owners] might think that Australia is the only market place, but probably China is also a big market for them.”

Zhang, who also founded of mobile payment provider Handpay and online travel services company Fortune Trip, shares with SmartCompnay five lessons she’s learnt about backing herself as an entrepreneur and convincing others to do the same.

Zhang says one of 99 Wuxian’s biggest advantages is its B2B business model, which she calls a ”very unique proposition” that is difficult to benchmark against other companies.

“We are quite unique in the market, not only in Australia but also in China,” she says.

She says being distinct from your competitors gives you an important advantage, but the drawback of being so different is sometime people will find you “difficult to understand”.

Her advice is to “communicate effectively with your market”, so you can leverage your uniqueness.

2. Make your differences work for you

Asked if she’s ever felt disadvantaged as a woman in business, Zhang says, “actually I think [it is] an advantage.”

Zhang says a woman’s management style is often quite different compared to a man’s, which allows women to win clients over with a “softer” approach.

“Myself, I think I’m good at communication and as a leader. [Women] often have a very good character and something charming in their leadership,” she says.

“There might be some special skill you have, that the others do not, that is an advantage.”

3. Focus on one market before you consider expansion

Zhang admits Australian investors are frequently asking when Wuxian 99 will bring a commercial presence the country.

But because the company is still very young, at just three years old, Zhang believes it is important to focus all Wuxian 99’s energy into its original market before it turns its attention to other markets.

“I thought we should be more focussed on [our] current market and focus on serving our clients and business partners in a better way, [with a] better quality service, and then we will talk about expanding the business overseas.”

4. Stay ahead of future trends

Zhang admits Australia “is a little behind” her home country when it comes to the adoption of some of the technology 99 Wuxian is pushing in China.

“Frankly speaking, for the Australian market, the new technology should be developing a bit faster, especially in service field,” she says.

“For example, if you order a book from Amazon, probably [in Australia] people would be patient and wait for 2-3 days for it to come. In China, basically with most deliveries, you buy a book in the morning, you get it in the afternoon or the second day. That expectation is so different.”

Zhang says as a leader in the mobile space in China, it has been very important to keep ahead of trends in her own country and all over the world and she suggest Australian businesses do the same.

“Mobile phone and wireless technology, is growing so fast all over the world. This is the new era… everybody is carrying a mobile phone and mobile phone [is] becoming your self-service, your financial terminal, your POS [and] everything in your pocket [is] so possible and so convenient… In some kind of the service field, Australia is a little behind.”

Zhang says convincing some hard-headed chief executives to back her company was “of course a challenge” but each conversation was made easier the more she proved herself.

“At very beginning it took a more than a year to really sign up the first bank, but one year later on [it was] much easier,” she says.

“In 2014 we signed more than 20, so basically it’s [easier] once you overcome the difficulties or the challenge at the very beginning.”

One way Zhang got her foot in the door was to offer the some of 99 Wuxian’s products for free in the early stages, so she could prove the service’s worth and establish a good reputation.

“Once we overcame the challenge at the beginning, [getting] one or two top banks on board, the others realised service was good and the company was good to work with.”