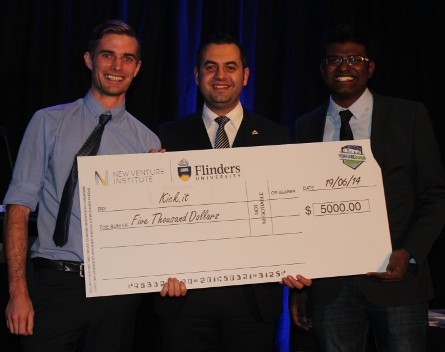 “What would normally be meaningless sharing of experience becomes a data topic for review,” Larsen says.

“Using the power of social networks you can scale that to people in your area, people with similar tastes to you.

“It will allow you to review things that have never been possible before. You could review not just the movie, but the cinema, the restaurant you went to before the movie, literally the specific dish you ate at the restaurant.”

Larsen is developing an application programming interface (API) and apps for Revuudle across all platforms.

“I call it the social reviewing network,” he says.

“In the current ecosystem of user reviews there are many, many places for people to leave their reviews, but there’s not much incentive to do so.”

Larsen says there’s the potential to integrate the review platform with commercial websites, and it will be linked with the Facebook and Twitter accounts of users.

The silver eNVIe went to Kick it, an app to help smokers track their habit and quit smoking when they’re ready, while Floragram a service which delivers the best flowers from local markets, was the people’s choice winner.

“I was actually impressed with the quality of the pitches, given how early stage this program is,” Eikmeier says.

“Four or five real standouts for me, and I shall be following their progress keenly.

“The pitches themselves were polished, and most punched through even for the people or ideas I wasn’t as keen on.

“They have honed in on the problem/solution succinctly, which sets a business off on the right path.

“I’m also very impressed with Matt Salier, who is taking a very inclusive feeder approach with NVI, and I’ve got some confidence it will be a valuable contributor to this growing Adelaide startup ecosystem.”