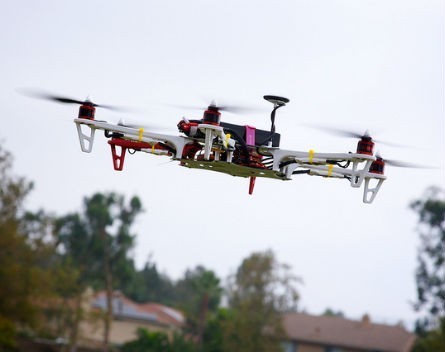 An Australian startup is hoping to revolutionise the surveying and building industries by using a cloud-based platform to create 3D images from data gathered by drone aircraft.

Propeller Aviation works by collecting data, from either a third-party UAV (unmanned aerial vehicle) service or through one of the company’s drones and feeding it into its cloud-based platform, called Aerodata. From there the data can either be viewed through the Aeroviewer app or be exported to another app through an API.

The company was cofounded in May this year by drone expert Rory San Miguel and software guru Francis Vierboom.

“Rory helped the UNSW set up a drone society and imported a lot of quadrocopters from China. We worked together on a number of projects… I got involved in late 2013,” Vierboom tells Private Media.

“With Propeller Aerobotics, we took on a big project working with surveyors and construction companies on 3D modelling. But the problem is not doing that with drones – the problem is making the data coherent and creating a platform for that data.

“The problem we’re addressing is many of those companies do their surveys and give it to you on a USB stick instead of in the cloud…. We can get them to log in and upload the data and then make it available.”

Propeller Aerobotics comes at a time when interest in UAVs is booming.

“There are already around 170 licensed UAV operators in Australia, and we’ve opened them up to surveyors. There was less than 100 [operators] 12 months ago and that number is likely to double again in the next 12 months.

“Using the entire industry means that you can use drones from a local operator at local cost in the surveying industry, instead of flying in specialist operators and having to pay for a hotel room for them.”

According to Vierboom, there’s growing interest internationally in the startup, which is based at the National Innovation Centre in Canberra. It was one of 19 finalists in Cisco’s Internet of Things (IoT) Innovation Grand Challenge, and will be among the four Australian startups set to participate in the 1776 Challenge Festival in May next year.

“In the Cisco competition, we were look at as an opportunity for an IoT technology that could change the world. Propeller Aerobotics was a great story about how flying robots won’t be toys anymore.

“Just in Australia alone, surveying is worth $4 billion a year. Drones will have a huge impact as well in environmental monitoring and project management.”