Forget the crystal vase, Envelope.do have got an experience in store for newlyweds 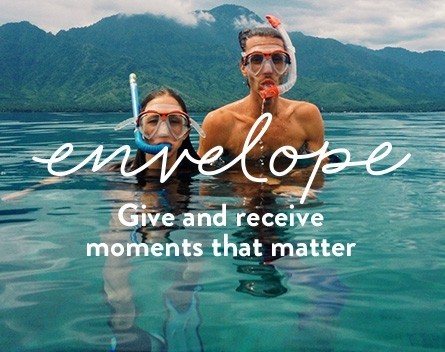 Wedding registries have long been dominated by lists of homeware products, but a Melbourne startup is taking a new approach by encouraging wedding guests to gift “moments”.

Melbourne-based Envelope.do is an online platform that helps couples that are getting married request experiences like dinner at their favourite restaurant, cooking classes, or a trip away.

Co-founder Tom Holt says he and his fellow co-founder Simon Baldwin came up with the idea in March after speaking to a number of friends, who were abandoning the idea of traditional gift registries altogether.

“There was this disparity in gifting at weddings, the offerings were all a bit transactional, a bit cliché and tacky,” Holt says.

“Some friends were avoiding gifting at all, and others were sending account numbers. We noticed this pattern and thought, maybe there’s something in this.”

After conducting some research, simply through talking to friends and people they knew were getting married, they came up with Envelope.do. It enables couples to create a registry page through a web app, and then after a series of questions, allows couples to choose different types of experiences they would like to receive as gifts.

Their friends and family can hop on the Envelope registry, and the platform suggests a price range for the “moment” or experience they would like to gift, and allows them to provide the couple with the cash to make it happen. They’re charged a small fee which covers the payment gateway and Envelope takes another small fee “to keep the lights on”.

Holt says one of the biggest problems for newlyweds was the process of thanking those who bought gifts. For a small fee, Envelope helps solve that problem by allowing them to customise a thank you card, which is then sent to all their gift givers.

“The ethos behind this was if our customers live the moment that they’re gifted on their registry, we believe that’s going to make a positive contribution to their relationship,” he says.

“One of the consistent pieces of feedback we kept discovering was young couples generally have a lot of stuff already.

“There’s something superfluous about setting up an online registry or physical registry at a shop or department store to ask for more.”

The site’s registries feature moments which are visualised thanks to the help from the Visual Supply Co online community.

The startup has already spoken with investors and secured angel investment, but wasn’t in a position to say who from or how much investment they received.

The platform is looking for beta testers right now and is aiming for a full public launch sometime in November.