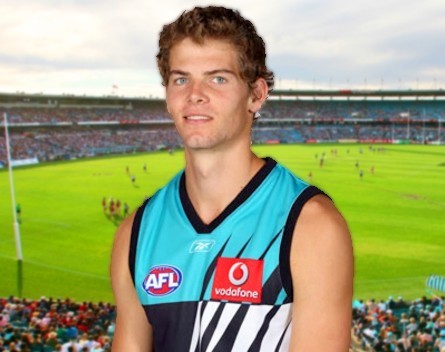 “We differentiate ourselves by the premium quality of our content. We only offer notes from students who received a high distinction or distinction in their subjects – we vet applications – so you know the notes are written by good students,” Minson says.

“We also don’t sell assignments, just notes, so we have a positive relationship with institutions.

“Some sites boast how much content they have, and how they have thousands of pages, but at the end of the day, students just need to download the best notes possible… We focus on putting design centre-stage and filtering hyper-niche content.”

The younger brother of Western Bulldogs star Will Minson, Hugh was drafted by Port Adelaide with pick number 58 in the 2005 AFL National Draft.

“I was drafted at 17 the day schoolies started, so there wasn’t much time between drinks. Being a footballer was always my dream, to have a 200 game career and win a premiership for Port,” Minson says.

“I had a bad left knee in April of 2008, where I couldn’t run anymore. The doctors at Port told me to retire. I had to reassess things, and decided to get into business.

“I ended up studying at Bond University, which has a major in entrepreneurship. It’s also one of the few unis to offer trimesters, which allowed me to get through the course fairly quickly.”

Having completed the course, Minson moved to Sydney in 2011, where he met Nexus Notes cofounder Richard Hordern-Gibbings, joining the business in 2012.

“I also worked for two other startups [since moving]. Around two months ago, I left those to focus on Nexus Notes,” he says.

“We see the education industry as ripe for disruption. We’re in the peer-to-peer marketplace space. We’ve already seen how sites like GumTree and CarSales have created markets for physical products, and sites like Uber and Airbnb are now doing the same for services,” he says.

“Tech is allowing people to conduct business directly with one another.

“We would love to eventually be international, but our focus is on Australia and New Zealand first, and gaining traction in the Australian marketplace.”