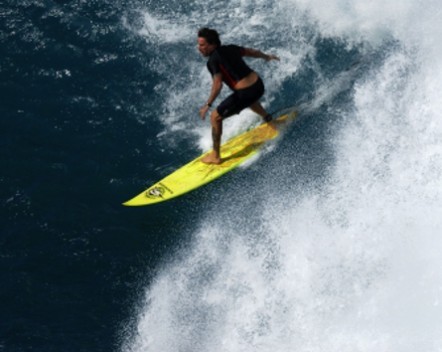 I’m not much of a conference-goer, but in the past month I’ve attended two start-up events – MaiTai in Maui and On Cue in Boston.

Both were hosted by dynamic VCs – Bill Tai is a co-founder of MaiTai and Tony Tjan from top Boston VC Cueball curated and hosted ‘On Cue’. Both highlighted parallels between extreme sports athletes and entrepreneurs.

The MaiTai attendee group are pro-kitesurfers and entrepreneurs: On Cue opened with addresses from world free dive champion William Trubridge and ‘Iceman’ Wim Hoff, who holds 20 world records related to spending time in the extreme cold.

I listened as athletes talked about how they become champions and what goes through their mind in the face of challenges.

As an entrepreneur, I often feel pushed right to my limit. Sometimes, I recall tough situations in which more experience, coaching or discipline would have helped me deliver better results.

For athletes, challenging situations can mean life or death. They may not have the luxury of failing, learning and starting again. As they spoke at MaiTai and On Cue, I listened for thought patterns that helped them succeed in treacherous, time pressured situations. How could I learn to become a better entrepreneur?

These four things stood out.

Susi Mai, the other co-founder of MaiTai, is a world famous kite-surfer. She’s the first person named ‘King of the Air’ three years in a row, and the first woman to inspire her own kitesurfing product line.

I may have thought that life as a sponsored kitesurfer would be one of the best jobs in the world. That every morning, Susi must leap out of bed eager to get to the water. Surprisingly, when asked to name her biggest challenges, she replies that it can be tough to get up early every morning, rain or shine. If the conditions are difficult, she doesn’t feel like going out on the water to practise.

Like every high profile sport, kitesurfing is incredibly competitive; staying on top of the game requires a level of dedication and commitment that most of us can’t imagine.

Entrepreneurs experience hard times too. I had a tough start to the year; in New York alone, separated from the rest of our team.

I’ve been meeting New York-based merchants, media and investors by day and then working on the product with the team at night. I’m stretched, tired and setbacks hurt. Just like the kite surfers: conditions are hard and sometimes I don’t feel like walking into another pitch meeting. Sometimes, I’d rather stay at home and watch TV!

Hearing Susi talk about how as an athlete she struggles with the same thing, and still gets out there in the wind and the cold every day even when she’s exhausted, made me realise that all who put themselves out there go through this. The ones who succeed are the ones who slug it out.

William Trubridge holds the record for the deepest unassisted dive. He spoke about what goes through his head when on the way down and two things stood out. He only focuses on ‘right now’, not on the much more dangerous ascent ahead.

Psychologically, he knows that if he allows himself to think about the ascent, even for a second, then he won’t have the strength to go to the depths he must reach to compete.

This made me consider the amount of time I spend thinking about the future. Does it steal vital energy and the focus I need for the present? It’s important to keep the future in mind but, like free diving, I’ve found the process of building Posse so challenging, with so many things to think about, that one of the hardest things is focus.