From two people to 50 in two years: One app developing start-up’s story 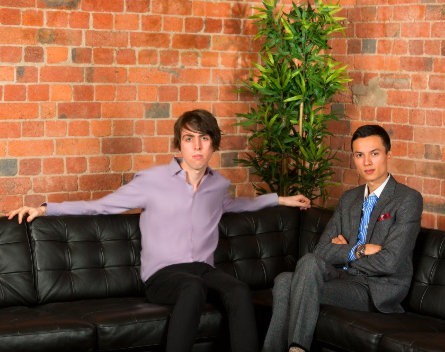 Launched as a digital marketing company in 2011, Humphrey, 22, and McDonald, 21, realised quickly they were inventors rather than promoters.

“As our business took off and we went through about six months of digital marketing, we realised we were interested less in marketing products than creating things. This drove us towards Appster,” McDonald says.

Both McDonald and Humphrey had been creating websites since their early teens. McDonald dropped out of university in his first year as they pivoted towards an app and software development company.

“It was just way more exciting to focus on a fast-growing company,” McDonald says. “Josiah had led the way here, he dropped out of high school in year 11 to do things he was more interested in and already capable of. We’re obsessed with learning, but this just a different way of doing it.”

The first software development project they worked on was for a teacher. Called AussieABC, it was designed to teach children how to say the alphabet in the Australian way, rather than American.

“We were a two-person team then, and since then our capabilities have definitely improved,” Humphrey says.

The team of 50 is working on just over 60 apps. The team is fairly evenly split, with 25 based in Melbourne and the rest in its Indian office in Gurgaon, opened in January 2013. They also work with over 40 freelancers or contractors.

“Our vision for the company was to become the largest app developer in the world, but to be able to do that, we realised we needed to have a hybrid model with quality assurers, project managers and graphic designers in the same locations as our clients,” Humphrey says, adding many of the world’s best developers are based in India.

The decision to create a second base in India was also for financial and scaling reasons.

“The fact is you can do everything in Australia, but it means that projects have to cost hundreds of thousands, and that’s not who our clients are. We do a lot of work with start-ups, who need the same quality but for a fraction of the cost,” McDonald says.

Humphrey adds their goal is to have offices in 42 countries within the next five years, so they’re focused on scaling quickly.

“If we were going to try to do that with just Australian designers and developers, it would be impossible. We get to choose from a much larger pool of talent in India,” Humphrey adds.

Having worked with a range of clients and industries, McDonald and Humphrey say the most important thing an aspiring app owner can do is research and develop their idea thoroughly.

The pair say the hardest thing to manage has been to create a culture of thorough execution that retains the best people.

“The strategy has always been pretty easy, but the hardest thing of all is attracting the right people. When you’re a really small start-up, it’s not very interesting for very experienced people to come and work for you,” McDonald says, adding they passed a tipping point about six months ago when they focused on investing in their team and developing a great team culture focused on the overarching vision.

“The thing we’re most passionate and excited about is where the app development space is going. We’re getting to build things that have literally never been done before. We’re inventing things and that’s incredible,” Humphrey says.