From zero to 50,000 users: How we growth hacked our way without spending a cent on marketing 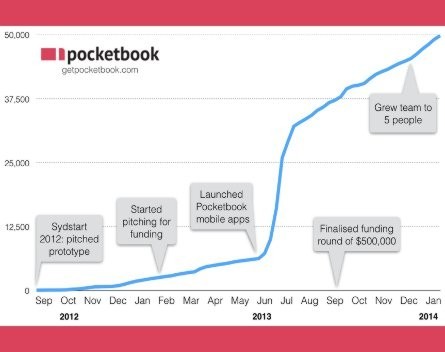 It’s been 511 days since the first line of code was written. That’s about 900 sleepless nights between Alvin and me and over 10,000 unsalaried hours of designing, coding, debating, testing, talking to our users and continuous tinkering.

Malcolm Gladwell said 10,000 hours was the tipping point where people started to get good at something, but somehow we’re still not convinced.

The numbers came in and we’ve passed our first big milestone of 50,000 Aussies using Pocketbook – a huge number for two guys working out of their living room who have spent nothing on marketing.

But as we reflected, we’re still a fair way off my measure of success: the moment when we shoulder-surf and see that most of the carriage is opening up Pocketbook on our crowded morning train.

We got our start at Sydstart 2012, where Alvin first presented his prototype. As a lifelong friend, I was naturally optimistic. What really surprised me was that over 250 users signed up on the day, and about 1000 signed up in the following weeks.

I joined Pocketbook on October 1, 2012, and we started to develop a plan of attack.

Well it was less of a plan, but a list of opportunities we should work on – or the “hustle list”. And this is where growth hacking started for Pocketbook.

Earlier on, a lot of our users emailed to thank us for having developed “Mint.com for Australia”. We knew about Mint through our research, but weren’t aware others knew. Little did we know people were already asking the same questions.

So step one, we engaged them. Step two, we got the word out to mainstream media that we were building Mint for Australia.

Today, if you search for ““Mint.com for Australia”, you’ll invariably find us.

Viral, viral, viral. Everyone wants their product to be viral but not many focus on the quality of the product to start off.

The way we think about product is painstaking – Alvin is our Steve Jobs. He picks and chooses what makes sense and if it’s not simple, or if we haven’t figured out how to do it simply yet – we don’t build it.

Through this focus, our users loved us and we quickly got wind that they were sitting down with their friends and family talking about Pocketbook.

Their problem was now how to quickly tell their loved ones. To solve this we created “Invite a Friend” and then we supercharged it with a voting feature where our users can help us spread the word every time they request a feature. So it’s win-win!

3. Get authorities in the industry to talk about Pocketbook

As Alvin and I sat down to think early about who can help us, we got to David Koch very early. David has been talking about personal finance for as long as we both remember and he is also an expert on the Australian consumer psyche – he talks to 4 million Aussies every morning on Sunrise!

We reached out, he was impressed and he’s now an investor. Besides courting David, we also received glowing reviews from CNET and Lifehacker, with CNET calling us “the best app of its kind (they’d) ever seen”.

4. Getting our mobile strategy right

As you can see from our growth curve, mobile factored in as the most important growth factor.

While it may be obvious now, at the time we weren’t so sure. It only came into the picture when users started telling us they couldn’t find us on the app stores.

We took a serious approach to mobile from the get go – not willing to just offer an optimised version of our web product experience, as the use case is very different. And this has made all the difference.

Apple picked Pocketbook as a featured app on iTunes and that drove massive awareness among iPhone users.

It was the first app you saw on their app store as you logged on for a month and we were the most downloaded finance app across Australia, beating out all the major banks and PayPal.

The future of marketing at Pocketbook

So those are the things we’ve done to get to 50,000. We’ve learnt the lessons and are now exploring a whole bunch of new techniques to get to the next 50,000.

I’m personally excited about growth hacking at Pocketbook. We just grew our team and hired Andre, our new full-time growth hacker. He has an entirely different take on the things we should do to make Pocketbook reach every single Australian.

Our philosophy has however remained: “Build a great product and you don’t need to spend much to sell it.”

More information on Pocketbook can be found on their website.