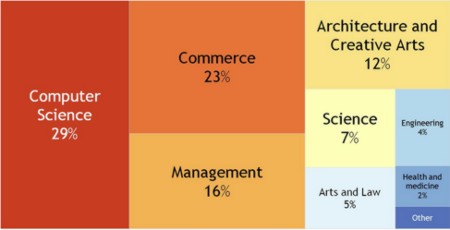 The group is hosting a two-day summit, during which more than 50 key players will discuss what’s needed to create a vibrant tech start-up community in Australia.

“There needs to be a greater focus on computing and engineering subjects in our schools, more awareness of the opportunities of the tech sector and better support for entrepreneurs.”

Noble’s comments come after Barrie described the Australian venture capital industry as “dead”, claiming the environment has “pretty much dried up”.

“A company like Atlassian, for example, its last financing was $US60 million,” Barrie said during the summit.

“The entire Australian venture capital industry did not raise enough money to even do that round in one company.”

To support the work of the StartupAUS project group, Google has commissioned PricewaterhouseCoopers to conduct an in-depth study into the state of Australian tech start-ups and the ecosystem supporting them.

It will also look at what other countries are doing. Here are some of the preliminary findings:

The StartupAUS project group has defined a tech start-up as having the following characteristics:

The group is also interested in Australian start-ups that have become established:

A small but growing ecosystem exists

“So far we’ve identified more than 1,500 startups. These range from one or two person start-ups created in the last 12 months, to more established businesses,” the group wrote in a blog post.

More founders have computer science education than any other discipline

“Based on the qualifications of current Australian tech start-up founders, we can say that there are two types of skills that are crucial to founding a successful start-up – computer science and business skills,” the group said.

“This reinforces the importance of tech qualifications.”

What is the tech start-up ecosystem?

“The rate of progress may vary greatly.

“As start-ups move along this trajectory they may draw from a wide range of supporters or ‘feeders’… ‘Feeders’ create the ecosystem which surrounds the entrepreneurs and their start-ups.

“The start-up ecosystem comprises of communities of support organisations and start-ups.

“Each community will function somewhat separately, but are also linked to other communities through various relationships.

“As these relationships develop, the ecosystem becomes more than just the sum of its parts.”