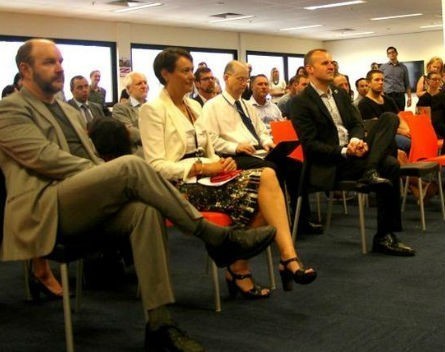 ACT Chief Minister Andrew Barr has launched the 2015 intake for the Canberra-based Griffin Accelerator program, with applications open from now until May 1.

Griffin Accelerator chief executive Craig Davis told StartupSmart a key differentiator for the accelerator is that all the mentors are also equity contributing investors.

“All the mentors have skin in the game, so they really have to be on their A-game, or else they lose money. We encourage [the startups] to work hard, we don’t distract them, and provide them with very high-quality mentoring. It’s focused mentoring, so there’s no roundtables and small groups.”

Shortlisted applicants with pitch their ideas in Canberra on May 7, and following a due diligence process, this year’s participants will be announced in late May, with the core three-month program kicking off in late June.

Davis says this year’s program follows the success of the program last year. The pitching event at the end of last year’s program ended up producing 45 expressions of interest from Sydney and Canberra, and Davis promises there’s big news in the pipeline for some of the graduates.

“In the first year, the mentors were all senior successful entrepreneurs in Canberra with track records as angel investors. We partnered with ATP Innovations and they helped us with some aspects. There were 40 startups that nominated, 14 were shortlisted and five ended up in the intensive July/August/September program,” Davis says.

“The startups receive six months of free coworking at Entry 29 and an investment of $25,000 in funding, in exchange for 10% equity. It’s important to stress that’s not intended to place a valuation on their business – that’s to create a risk for the mentors.”

For startups from interstate or rural and regional areas, Davis says there is no requirement to be based in the ACT in order to apply.

“There’s no eligibility requirement. We’re open to anyone with a high quality, ambitious idea.”

The graduates from the 2014 program included:

Click here to find out more about this year’s program.