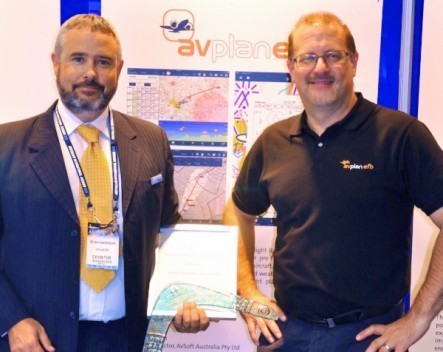 The company, backed by entrepreneur Simon Hackett, has developed an EFB for the iPhone called AvPlan EFB that allows pilots to view the maps, charts and other information they traditionally needed to hold in a heavy flight book. A version called AvPlan Lite is also available for Android devices from the Google Play store.

“They do three award categories in civil and three in defence. We applied when they asked for entries for the civil innovation award, and of the many entries, we were the winner. This is the big one for commercial aerospace awards in Australia – we’ve run out of awards to win,” Anderson says with a chuckle.

There’s big news on another front for Anderson, with AvPlan recently securing a major contract with the Australian Army.

“The Army has been conducting trials for the past two years of various platforms. Recently, they passed the product selection space and chose our product to equip all their pilots with,” Anderson says.

The deal will see around 200 Army helicopters equipped with iPads running AvPlan EFB. Anderson says the Army is leading the way in terms of technology with the move, and that he is not aware of another defence force anywhere in the world that has adopted an EFB app.

“There have been additional challenges going into the defence space, and that’s something they’ve helped us with,” he says.

There’s also good news for the company on the civilian front, having partnered with a Boeing subsidiary called Jeppesen in a deal that has led to significant interest from ad-hoc charter and business charter flight companies.

The deal allows AvPlan EFB to access Jeppesen’s international data, while pilots will be able to undertake flight preparation and submission in AvPlan and then transfer that information to a Jeppesen device.