Homegrown Aussie startup achieves a world-first in the US 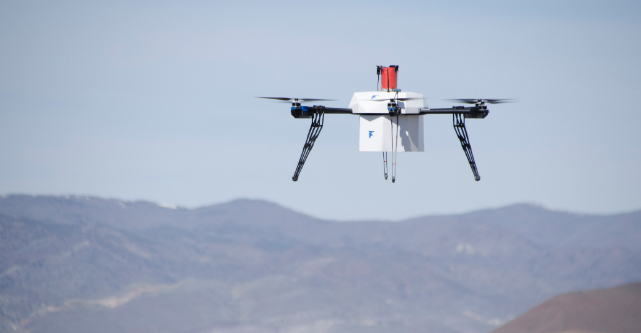 Sydney startup Flirtey has successfully completed the first ever fully autonomous, FAA-approved urban drone delivery in the US in a “major achievement” for the homegrown tech company.

Flirtey’s six-rotor 3D-printed drone delivered a package of bottled water, emergency food and a first aid kit in an uninhabited residential area of Hawthorne, Nevada, demonstrating the ability to use drones to navigate around buildings and make deliveries in populated areas with precision.

“It’s a huge accomplishment for the drone delivery industry as a whole,” Sweeny tells StartupSmart.

“We’re thrilled to be leading the space and look forward to the day when Flirtey is making regular deliveries to your front door.”

He says Flirtey has always been focused on humanitarian efforts.

“This historical delivery is bringing us one step closer to making that a reality.

“Our technology will not just change our daily lives, it will save lives as well.”

Conducted in partnership with the Nevada Advanced Autonomous Systems Innovation Centre at the University of Nevada, Reno, the Flirtey drone flew itself along a pre-determined route and lowered the package at the set drop-off location.

A pilot was on standby but wasn’t called into action.

It’s the first drone delivery of its kind and another in a series of “ground-breaking” accomplishments for the Australian startup which completed a successful trial with New Zealand’s national search and rescue organisation last year.

For Flirtey, the focus is still on R&D and learning from this record-breaking delivery.

“We’re currently focused on applying what we’ve learnt from this flight to our current drone delivery technology,” Sweeny says.

“This latest operation has given us a significant amount of information to be used towards future tests and operations.

“From here we will continue to develop and refine our technology. With collaborations that include NASA and the University of Nevada, Reno, we’re leading the industry in autonomous drone technology, drone safety systems and advanced delivery technology, and look forward to delivering direct to customers’ houses in the not too distant future.”

He says his team’s ability to quickly iterate and adapt at a rapid pace is one of the keys to its success.

“I’m extremely proud of my team’s ability to work on extremely fast-paced testing and production timelines, which includes rapid prototyping and designing to overcome various challenges. The research we gather and lessons learnt are immediately implemented to drive us forward.

“We’re going up against some of the world’s biggest tech companies and I believe it is our team, our partnerships and our determination that sets us apart.”