How a Melbourne startup could shake up the aviation industry 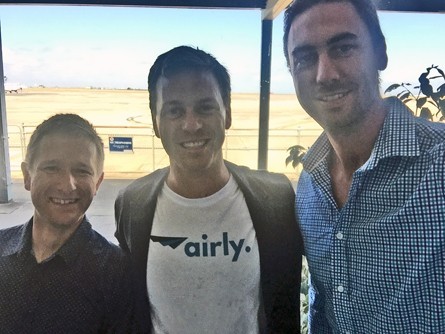 For a small but (presumably) well-off number of Australians, air travel between Sydney, Melbourne and Canberra could be about to change. Startup company Airly is planning a new passenger membership model, and aims to compete, in part, with the major Australian airlines.

Its model is based on a successful one in the US, and while there are differences in the Australian aviation market, could it also be successful here?

‘More than a seat on a plane’

Airly is a self-styled “unique entry into the world of private aviation, a world that is normally highly exclusive and highly expensive”.

The startup will operate Beechcraft King Air 350 aircraft. The aircraft is the same as that used by the Royal Flying Doctor Service, the Royal Australian Air Force and numerous international operators, and will have eight leather club seats, each one an aisle and a window – “eliminating the ‘armrest war’ experienced when flying commercial”. Passengers will also travel with “like-minded” individuals including “movers and shakers”, according to Airly publicity.

Passengers will have their “every need” met – except perhaps lavatory needs; while an Airly aircraft does have a belted lavatory, one’s experience, it seems, “will be far more comfortable if you use the [airport] lounge toilets instead”.

More prosaically, Airly is marketed as saving one to two hours per round trip through an absence of queues, car parks and, well, people. Airly says it will provide “all the benefits of having your own private plane at a fraction of the cost”. In terms of cost, memberships have three tiers – “starter”, “business” and “enterprise”. After a A$1000 joining fee, each tier respectively costs A$2550, A$3150 or A$3750 per month, together with other opportunities to bring a friend free every month.

Most significantly, it should be noted that Airly will not itself be an actual carrier. Rather, it acts – or will act – as an agent for its members, and will not be the operator of the relevant scheduled aircraft. Airly states that Civil Aviation Safety Authority (CASA) accredited Air Operator Certificate holders”

“which have Regular Public Transport (RPT) approvals flying on behalf of Airly exercise full operational control of the aircraft. Any aircraft owned or leased by Airly are dry leased to the operating air carrier to facilitate operations by that carrier.

A “dry lease” (as opposed to a “wet” one) generally involves only the lease of the physical aircraft ultimately to the operating carrier without crew, maintenance (possibly), or fuel.

Australian carriers’ liability and insurance arrangements are outlined in the Civil Aviation (Carriers’ Liability) Act 1959. The Act gives the force of law to a number of passenger liability frameworks, including those arising under the various Warsaw liability instruments, and the 1999 Montreal Convention (MC99) which is the most passenger-friendly treaty, and provides a separate system of liability for domestic travel.

For Airly’s purposes, “members,” when flying, would be passengers for the purposes of the Australian passenger liability framework for domestic passenger travel.

In other words, Airly’s passengers would in terms of liability issues (accidents, for example) be treated at law in the same way as, say, domestic passengers on Qantas. Interesting issues may arise, however, when demand for one or more of the eight passenger seats on an Airly flight outstrips supply. While the contract for carriage or membership agreement between the passenger and Airly would no doubt deal with such an eventuality, one can imagine passenger … unhappiness.

And if Airly went bust and passengers (perhaps unsuccessfully) attempted to reclaim all or part of their membership fee… more unhappiness. In this regard payment month by month would seem to make sense for members.

And airlines do go bust fairly regularly. In the US, there has been nearly 200 airline bankruptcy filings since 1990 including those of Pan Am, Trans World Airlines and Continental. In Australia, while examples are fewer, Air Australia and Ansett are well known failures.

IATA (the organisation of the world’s airlines) projects that, beyond this year, airline profitability will slow due to the cyclical nature of the industry, increasing interest rates and carrier realisation of the maximum benefits of cheap jet fuel. Its CEO has said the industry’s profitability “is better described as ‘fragile’ than ‘sustainable”.

Notwithstanding this less than rosy (international) outlook, could this be the right time for the (domestic) Airly? In an average four weeks, 7.6 million Australians do fly on a domestic airline, 4.6 million travel with an international airline and 1.9 million fly domestic business class.

On those figures, absent any other consideration, maybe the times will suit Airly. And given its unique structure and business model, perhaps loss-making factors which apply to other, “traditional” carriers won’t apply so much to it.

Elitism in the skies

The Airly model – or variations of it – has operated in other jurisdictions. In Australia, however, on the scale and in the way Airly proposes, it’s new. It offers yet another “class” of air travel, albeit on fairly straightforward, but sparsely populated and nicely kitted-out aircraft.

In passenger terms, air travel has always been stratified (as it were). Airly – and developments like it around the world – is simply another iteration of this stratification.