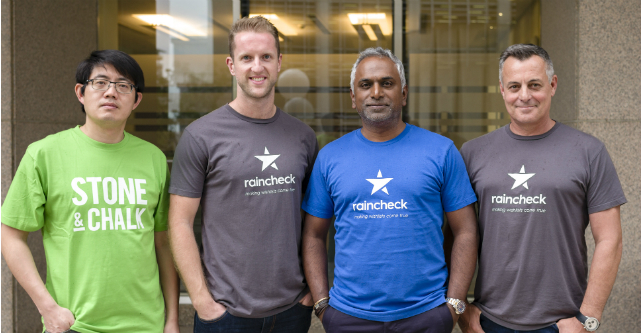 A Sydney startup has managed to attract a major corporate player from the very market they’re trying to crack, adding a multinational CIO to its team.

RainCheck founder and CEO Cameron Wall first spotted Woolworths Holdings’ chief information office Danny Naidoo – the man who would later become his own CIO – in the keynote speakers list at the tech conference.

“We thought he’d be a good person to get in contact with,” Wall tells StartupSmart.

Late last year, Wall reached out to him an app he’d been working on that allows users to search for apparel items online, store their favourites in one central location and receive notifications when they are nearby a physical location that sells them.

This time they were in the US for another major retail tech conference.

“We had a chat in New York and Danny was very keen on getting on board and getting into it in a strategic role,” Wall says.

“I am delighted to be a part of the RainCheck team particularly in this critical pre-launch stage of the development,” Naidoo says in a statement.

“RainCheck has the ability to become the single biggest omni-channel platform for retailers.”

Wall says it didn’t take a lot of convincing on their part because Naidoo instantly understood the app and believed in the idea.

“It was a bit of an ‘aha’ moment – he got it and worked out he knows what the problems are,” Wall says.

For startups breaking into established industries like retail, Wall says it’s crucial to have expert professionals on-board with a high level of knowledge and experience in how the sector operates.

But he recommends that startups do their homework first to identify where the knowledge gaps are so they do approach the right people.

“Identify who you might need and really have a couple of causal conversations to see if you get on and if it’s the right fit,” Wall says.

It’s also important that startups are able to scale fast, raise capital and appeal to a global market if they want corporate heavyweights to jump ship.

“It’s very hard for someone to come out of the corporate world into the startup world,” he says.

Users simply click the “RainCheck It” icon to save them and when they approach a store they’ve liked an item in, the app sends the user a reminder.

Users can also share their lists with family and friends.

The app is connected to a growing network of more than 300 online stores.

After working in tech for more than 20 years and helping to pioneer some of Australia’s earlier internet and mobile data development, Wall discovered there wasn’t much happening with apps connecting digital and physical environments.

“There’s a lot of other tech that are online or offline,” he says.

“But there’s no one actually joining the two together.”

Though apps like Pinterest let you aggregate products on wall and Swirl digitises the in-shop experience, Wall says the bridge to make it simple to just buy things you spot online has been missing until RainCheck.

Realising an opportunity to make this link, Wall began developing the app in late 2014.

After nearly nearly 18 months of development to ensure the infrastructure is robust with a user-friendly interface, Wall is now counting down the days before RainCheck is brought to market.

When RainCheck launches this month, this version will showcase its core functionality before Wall and his team add in more features like shop assistance further down the line.

“I spent many years building ecommerce platforms and mobile platforms,” he says.