From an attic to a star-studded gala: Melbourne Accelerator Program celebrates another year of growing Australian startups 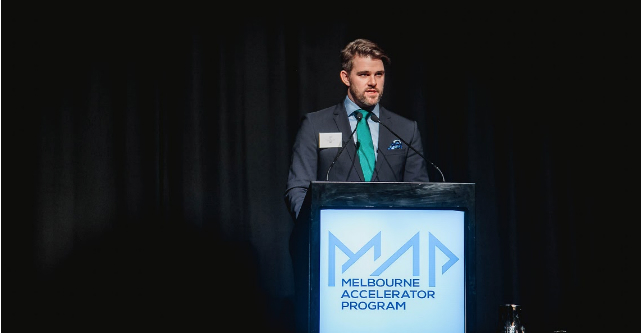 After beginning in an attic in 2012, Australia’s first university-based accelerator marked another successful year on Wednesday night with a star-studded gala event celebrating success, failure and the local startup ecosystem.

Even Olympic gold medalist Stephanie Rice attended along with other guests from Google, Oracle and IBM.

Speaking at the event, MAP director Rohan Workman said the group has come a long way.

“If this is your first exposure to MAP, well, this is Hollywood, this is glitz and glam,” Workman said.

“And this is such a stark contrast from how we started.

“This is such a stark contrast to MAP day-to-day.”

Workman said MAP blossomed out of a conversation to lift the culture of entrepreneurship in Melbourne.

Their humble beginnings in Melbourne University’s Old Metallurgy building saw Workman putting together Ikea chairs with allen keys so people would have somewhere to sit when they visited.

“[The space] had been unused for so long that when we first went up there to have a look at it we found a squatter,” he said

“Back then nobody knew what [a startup] was, I had to explain it to people before I could ask them if they would like to apply.”

This year MAP received more than 100 applications from hopeful startups.

Since 2012, Workman said MAP has helped bring up 24 companies that have created more than 200 jobs and generated over $10 million in revenue, with an estimated contribution to the Australian GDP of $32 million.

A number of founders that have passed through the program also spoke on the night to celebrate the humble accelerator.

Black.Ai founder Michelle Mannering presented the startup’s use of AI technology in early Alzheimers and Dementia detection on the back of a 20-hour flight from Seattle’s Microsoft Imagine Cup.

Nura CEO Kyle Slater, who is behind Australia’s most successful Kickstarter campaign, gave the audience a glimpse into the unique headphones, while Phoria CEO Trent Clews-De Castella unveiled the company’s new site after rebranding it from Scanned.

A moment to reflect on failure and success

During his talk, FoxType founder Scott Li spoke about how past failures have helped him with his latest venture.

After his first attempts flopped and previous co-founders left for bigger and greater things like working at Netflix, Li explained the key lesson it has taught him.

“While FoxType is in a good position, the risk of failure is still there,” Li said.

“With my first startup, i just tried to push the thought of failure out of my mind. With the second, I tried to prevent it and mitigate all the risks. With the third, I think I just accepted all the consequences of failure, but I’m still scared.

“As a founder, you should not let the outcomes of your startup determine your sense of self-worth.”

Working the room were startups like Palette, who crowdfunded $1 million to produce a smart colour-capturing cube, and is now moving into a new Melbourne office with a bigger team.

“We have some amazing companies in our midst we don’t know about,” Workman said.

To drive high growth ventures with global impact, Workman said the wider community needs to recognise and celebrate the people  who are making this happen, pointing to businesses like Envato, Aconex, 99Designs and Blackmagic.

“[Envato] has multiple transactions happening on their platform ever second now,” he said.

“They have VCs from around the world banging down their door.

“[Envato] should be a household name in Australia but it isn’t.

“If you ask any cinematographer around the world, ‘have you heard of Blackmagic cameras?’, that would be like asking an accountant if they’ve heard of KPMG.

“There are some amazing companies in and around Melbourne that we don’t celebrate as much as we should.”