How Ruwan Weerasooriya raised $4 million for a business with only $30,000 turnover 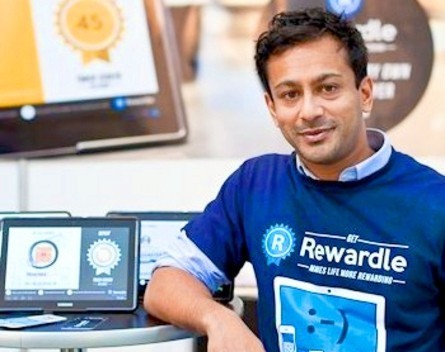 Investors were not deterred by what Weerasooriya freely admits is “negligible” turnover of $30,000.

Rewardle offers consumers and small businesses a digital version of a loyalty card.

“Pre revenue, we effectively replaced the old coffee punch card with a digital system which allows small business owners to build a database and use email, social and mobile marketing,” Weerasooriya says.

“So we are filling that vaccum of the Yellow Pages and building a social network of customers and merchants based on transactions.”

Weerasooriya says he is “effectively using the ASX as a funding source” rather than going down the venture capital route.

“We basically took a traction story to the market and raised $4 million. We are over subscribed,” he says.

“Doing the rounds with the VCs it was really a lot of discounting and compression for not much money and not a lot of help in terms of getting on with the business.”

Weerasooriya believes his track record in tech companies helped the listing process as did the willingness to put his own money into the venture.

The entrepreneur’s previous ventures include CafeScreen which he sold to oOh!Media in 2012, TouchTaxi and Pugnacious George.

“I’m unique as I’m a couple of time successful exited entrepreneur who put $2.5 million of my own money in before we raised a cent of funding,” he says.

But Weerasooriya says investors were also attracted by the growth potential of Rewardle.

“We’ve spent a year and a half in stealth just building a massive footprint and then we popped up and said ‘right we’ve got half a million users on the system and we’re growing like a hockey stick’,” he says making a sweeping upward gesture with his hands.

Weerasooriya says the ASX is emerging as a potential growth funding source for early stage businesses.

He points to the back door listings of Bulletproof Networks, Decimal Software, Mig33, Newzulu and Spring.me along with recent market support for listed companies such as Freelancer.

“What we’ve got thanks to guys like Matt [Barrie] is a market that is receptive to tech stories,” Weerasooriya says.

“The way that we have raised the funding is very much around a growth forecast for merchants and users engagement. We have no reasonable basis to forecast, so there is no financial forecast, but we have a pretty strong view that there is growth potential”.

Weerasooriya estimates the listing process cost $300,000 to $400,000 but says the big benefit has been the public nature of an ASX listing.

“We wanted to play out on the big stage rather than trying to do it privately,” he says.