How selfies can be used to diagnose anaemia 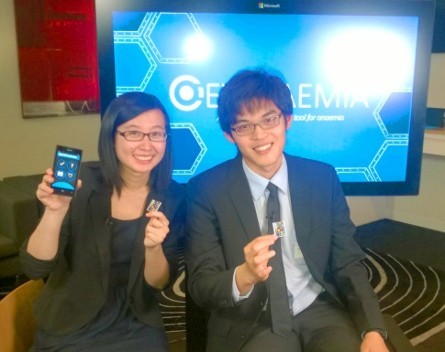 Selfies may now be used as a simple and easily accessible tool to detect anaemia, thanks to the efforts of two Monash University medicine students.

Jarrel Seah and Jennifer Tang’s startup Eyenaemia uses technology that allows a user to take a photo of their eye using a smartphone, from which it’s able to calculate that person’s risk of anaemia.

Anaemia is a deficiency in the number or quality of red blood cells, which can be dangerous if left untreated.

Eyenaemia is a world finalist in Microsoft’s Imagine Cup program. Seah and Tang will fly to Seattle in July to compete later this month.

Seah and Tang – who are both in their fifth year of studying medicine – came up with the idea while on a placement at a general practitioner in Mildura.

Tang says they came to realise how many people would need to come in for a blood test, often commuting considerable distances and at quite an inconvenience.

“We know that worldwide there are approximately 2 billion people with anaemia and it’s often very silent, but it can have consequences like heart failure, lung failure, and can continue undetected if you don’t see a doctor,” he says.

“The thing with anaemia is if you do pick it up early it can be preventable. Our app is trying to help early detection.”

Seah is a game designer in his spare time, while Tang says she has a passion for web design, and it was this basis, along with their knowledge in medicine, that allowed them to approach the problem from a unique angle.

“I think that’s what makes us a little bit different, going from that medical perspective, to being able to create a solution and try to work out if we can make it work,” Tang says.

Juggling such a venture while studying medicine hasn’t been difficult, despite the obvious time constraints.

“I think for both of us, when you kind of enjoy spending the time that way, when you really love doing something, you just keep doing it,” Tang says.

“Doing things after hours or whenever you can, fitting it in for both of us can be challenging, but we both love doing it.”

Microsoft Australia director of developer experience Sarah Vaughan says over the years Microsoft’s Imagine Cup has showcased many amazing ways technology can be used to solve real-world problems and Team Eyenaemia is another great example.

“The selection of Team Eyenaemia to represent Australia at the world finals later this month showcases Australian innovation at its finest,” she says.

“The beauty of the app for the Windows Phone lies in its simplicity and takes advantage of the platform to address the real need in discovering early onset anaemia.”