How startup culture has ruined me for corporates 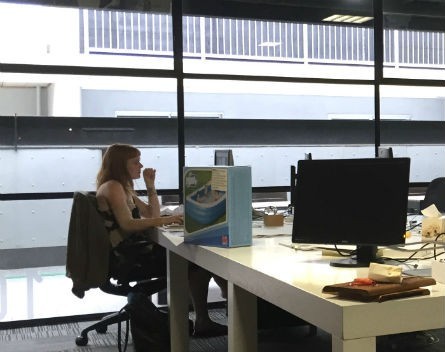 I’ve always thought of myself as a pretty weird fit within corporate culture. Having never adhered very well to corporate dress codes, understood the reason for having a meeting to discuss a meeting or put the person who works the longest hours on a pedestal. It’s always been a little irregular for me to enjoy “office life”.

A little over a year-and-a-half ago, I was working for a pseudo-government company when I decided it was time for a change. I interviewed for a marketing role within Melbourne startup ‘BugHerd’. Attending the interview in my usual corporate regalia, a grey suit skirt and shirt, I prepped with answers to the “usual” interview questions. “Why my greatest weakness would have to be that sometimes I pay too much attention to detail” (barf).

I realised I wasn’t in Kansas anymore.

The people in the office played loud music, they wore t-shirts and jeans, they talked to each other in casual tones and there weren’t any partitions, cubicles or meeting rooms in sight. My interviewers didn’t ask me the usual questions I’d prepped for and instead told me a little about the history of the company. What they’d been working on, what they were looking for and, most importantly, they wanted to know about me. Not about my “top 5 Marketing Strategies” but about what kind of person I was. (Of course we eventually covered my skill-set but not in the first interview).

It was really refreshing and I knew immediately I wanted to be a part of it, even though I knew nothing about startups, little about the tech industry and even less about web development. However, I was technically proficient in digital marketing, had a good background in traditional marketing and have always had a roll-up-my-sleeves and ‘get shit done’ mentality. I got the job and started nice and fresh, waltzing in incredibly eager to make a big difference.

I had a lot to learn.

Other than the obvious differences between corporate and startup culture such as the lack of dress code, the plethora of beard styles and the casual working environment (thumbs up to all these things). I started to realise that I had to adapt my style of working, quickly. Things can change on a dime in less than 24 hours flat. I’d never heard of the term ‘pivot’ before but it sure makes sense in the startup world. You need to be able to adapt and move on as fast as you can.

It was the first time my Google Analytics code was stripped from the site during the middle of a campaign that I was confronted with one of the challenges of the ever-changing nature of a startup. “That’s going to affect how I prove ROI?!” I would cry. I had to come to terms with, unlike in the corporate world, there being no “chains of command” or “hierarchy of reporting” in a startup and often the only person really interested in your very important reporting and analytics is you.

Losing my data was the least of my troubles, it merely pointed to missing processes and protocols that I had the opportunity to implement along the way. Processes you can sometimes take for granted when you work with a corporate company. Marketers who can look to Brand Guidelines or Communications Strategies for guidance or have wonderful procedure manuals to turn to should be pretty thankful these documents exist. I’m thrilled to help create such resources, but will never again look the proverbial horse in the mouth for having them in the first place.

Startup marketing can be lonely.

Going from a marketing team to one person is challenging. Marketing folks are often outgoing, type-A kind of people who love to have a chin wag about what they’re doing with the rest of the marketing team. This is a luxury busy devs scarcely have time or inclination for, unless it’s within the realm of real time messaging services such as Hipchat or Slack. It can get very loud in a chat room (usually sharing amusing cat gifs) whilst you can hear a pin drop in the office. The blessing with such a small and accessible team is you can gain insight from people with whom you’d not normally have access to within the corporate world. It’s not often that marketing would have access to the IT team on a daily basis.

In startup culture the term ‘marketing’ is oft referred to as ‘growth hacking’ (I don’t love the term). You’re looking for opportunities to grow the company as quickly and efficiently as possible. Scalability is key and it often feels like you’re in a constant state of test and learn, learn and test. A lack of historical data existing and having to rely on information such as peer recommendation or gut feelings can be very exciting though incredibly daunting at first. So many articles I’ve seen on Growth Hackers bang on about quick wins, constant iterating, testing and quick hacks. Though it’s so rewarding to get that first data in yourself and being optimising.

I’m not proud to admit it, but in big corporate companies it’s sometimes easy to get away with being a bit slack. Depending on your career level (though I’ve known plenty of managers with questionable work outputs) you’re possibly just one tiny cog in a big machine. Despite the clichéd image of startup employees sitting around playing Nintendo all day, there really isn’t anywhere to hide. People without the aforementioned ‘get shit done’ attitude won’t go much further than the door.

If you slack off, it’s noticed.

Comparing the realm of corporate culture to venture into startup land is like comparing apples and Winnebagos. I do wonder if I’ll ever make it back to the land of the corporate and be able to hold down my job.

Chanie Hyde is the marketing manager at Macropod. This piece was originally published on Medium.