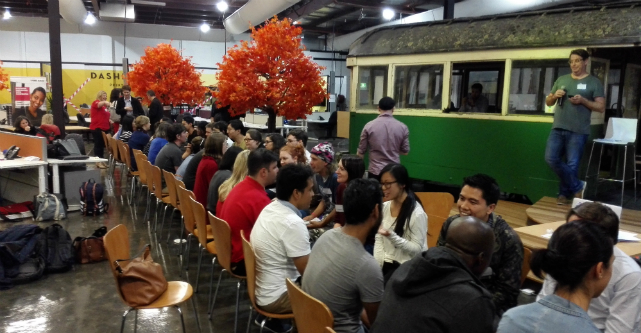 Five ideas aiming to help refugees settle in Australia that were formulated during the first ever Techfugees event in Melbourne have been turned into reality after 10 weeks of intensive training and mentoring.

More than 200 founders, entrepreneurs, developers and investors took part in the Techfugees hackathon in April, with five teams selected to take part in the program to gain the skills needed to get a startup off the ground.

They even had a surprise visit from Victorian minister for innovation Philip Dalidakis.

“It’s very humbling to see the generosity of the Victorian tech community, putting their resources and talents towards helping those who have very little,” Dalidakis tells StartupSmart.

Kudos to everyone involved with the #Techfugees hackathon in particular all of the pitch teams #cultov8 #awesomeness pic.twitter.com/3RmbMkMG4t

Interpreter Central, the marketplace connecting newly settled refugees with interpreters, took out the top prize on the night, scoring $1500 in cash plus ongoing support from One10 and The Difference Incubator.

The People’s Choice award went to Tell Me Now, a language system aimed at helping people learn and communicate with flashcards.

The judging panel was chosen to give pitching teams opportunities for new partnerships and clients, with Interpreter Central already in discussions with the Red Cross.

Other teams that pitched included data storage startup This is Me, one-stop information hub Welcomed and social network Friendfugees.

Cultov8 developed a program to give these hackathon teams a place to incubate their ideas and build the MVP, along with face-to-face and along mentoring, with many of the teams starting with barely any experience.

“None of them came from entrerpreneurial backgrounds so all of this was brand new to them.”

Through the Cultov8 program, participants learnt some startup basics including cost analysis and coming up with revenue streams.

“They looked at all parts of the business model canvas,” Ford says.

After seeing the outcome of the program via the MVPs created, Ford is now hoping to open Cultov8 up to more teams working on positive social and environmental impact ideas.

“My background is working refugees and migrants and the multicultural sector needs tech to help it manage their diverse needs,” she says.

“We’ll be happy to incubate others.”