How this Aussie startup plans to become a leading player in the booming world of bitcoin: #2015istheyear 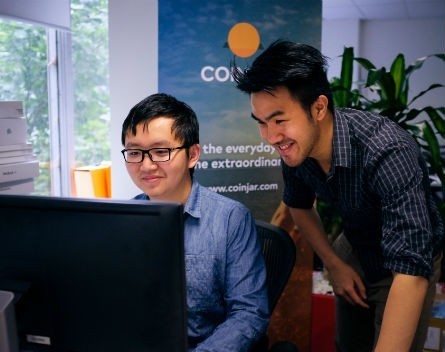 Today I’m joined by Asher Tan from CoinJar, a startup that lets you buy, sell, and manage your bitcoin. CoinJar was founded by Asher and Ryan Zhou in mid-2013 and it’s been a whirlwind ride ever since.

With something in the area of $50 million worth of transactions in their first 12 months of operations, they now have a team of 12 people and offices in Melbourne and London, as they look to become a world leading bitcoin exchange.

AN: Asher, thank you for taking the time with me today, I know you just arrived back in the country from the new office in London. How is that going for you?

Asher Tan: London is great. It’s one of the finance centres of the world. The UK have very progressive laws relating to bitcoin that make it an attractive market, and one that we will be focusing our efforts on in the coming year.

AN: Nice one. To take it back to the beginning, can you tell us what you were doing before startups?

AsherT: I was working as an analyst, writing economic forecasts for a large firm.

AN: And so what made you want to do a startup?

AsherT: I’ve always enjoyed building and creating new things. And I think I’ve always had the startup bug in me, it just took a while for me to find it! In my previous job I had a small team working with me and tried to cultivate a close bond within the team, in order to reach and surpass our targets. The thing was, we bonded so well and met all our targets easily, yet head office didn’t want us to do any more and probably viewed us as loose cannons.

AN: Was there any trigger point, any incident in particular that spurred you into action?

AsherT: Nothing specific, I was gradually getting more and more immersed in the local startup eco-system, going down to events, making friends with people actively working on startups. Reading all of Paul Graham’s essays on the subject. Seeing other people build and create great product and companies – I wanted to do it too!

AN: So how did you get the idea for CoinJar then. Were you on the bitcoin train from the early days?

AsherT: I had been working on a completely different idea for a good six months before applying to AngelCube. I met Ryan online and another partner at a networking event, and we applied to AngelCube. During the interview process, they told us that they liked the team, but not the idea, and that if we wanted to get in we should change the idea. At the time I thought it was like Dragon’s Den or The Shark Tank, and they were testing us to see our commitment. Turns out it wasn’t a test. So over the weekend we brainstormed a bunch of other ideas, and CoinJar was the one we agreed upon. Thankfully AngelCube liked the idea as well, and the rest is history!

AN: Haha, too funny! It sounds like you’ve never been short of ideas… When did you know that this was the one?

AsherT: The early signs were good, even during the first few weeks of AngelCube it was obvious that we were having early signs of success relative to the other teams. For a while things were very stressful, but one of the mentors at AngelCube reminded us that the stress was due to our product being too popular, which is a really good problem to have. It wasn’t too long into the CoinJar journey that we did our first million in transactions. From that point onwards there wasn’t a doubt in my mind.

AN: Indeed. Given how fast things have been moving with CoinJar, I’m sure you’ve hardly had time to take it all in. But to date what would you say has been the biggest lesson learnt?

AsherT: When you can’t figure things out that’s what your co-founder is there for. Ryan built bitcoin businesses before, and especially at the start of our journey it was him leading the charge in terms of what direction we should take, what we need to build, etc. Some of his ideas were crazy, and we spent many a night arguing over what was worthwhile and what was not. Thankfully most of his ideas were right!

AN: Excellent! And just lastly, do you have any advice for the would-be entrepreneurs out there reading along and getting inspired to be the next Asher Tan and Ryan Zhou?

AsherT: Hustle. You have to use every resource at your disposal to keep your startup alive. At the end of AngelCube all the teams went to the US as part of the program, with the goal of raising a seed round. As a group we went down to a startup trade show called TechCrunch Disrupt, the thing is, all the other startups looked very slick and professional, with banners and display monitors and everything.

As a three-month-old startup we had none of this. So what we did was go down to Best Buy and purchased the biggest screen we could get our hands on. We were careful to take very good care of it whilst in our possession and not remove any of the stickers. As a result, we were the only AngelCube team to have a display monitor in our booth, which we returned as soon as the trade show was done, so it cost us nothing”!

AN: Wow, thanks a bunch, Asher. Best of luck with CoinJar in the coming year.

This is the part six of our #2015istheyear series.

Part four – Why ‘manual first’ can help you MVP quicker.

Part five – David Chung of etaskr on chucking in corporate life to chase the startup dream.