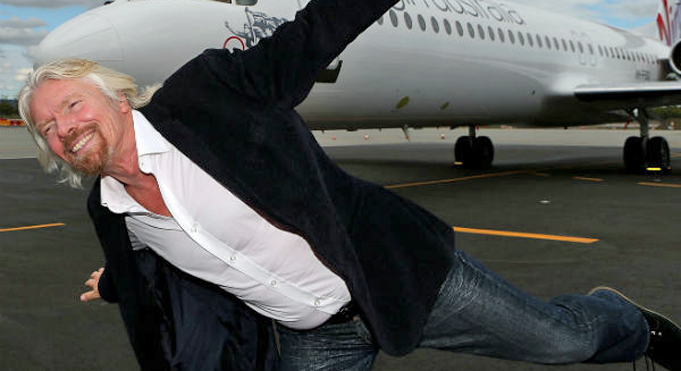 Tim Carroll gave up a million-dollar salary at Village Roadshow about four years ago to start his own company.

His startup, BUCKiTDREAM, is an platform connecting people with brands who can make their lifelong dreams – such as travelling overseas or snorkelling the Great Barrier Reef – a reality.

The business launched in June last year and has since raised around $4 million in funding.

But just in case starting a digital platform from scratch wasn’t enough of a challenge, Carroll had very specific goal in mind.

He wanted billionaire Sir Richard Branson to star in a promotional video to help kickstart some serious growth for the company.

So two years ago, Carroll cooked up a plan that involved visiting Branson’s Necker Island for a tennis tournament.

“I thought if I go knocked on their door – the people who run the Necker Cup – and offer to be a marketing sponsor, that would allow me to be at Sir Richard Branson’s island and be associated with the Necker Cup and, by extension, Branson,” Carroll told SmartCompany.

“I came back and did it in 2015 with the intention of getting Richard Branson to the face of the BUCKiTDREAM launch.”

Carroll says he put together a short video saying Branson was the first ever “buckitdreamer”.

He presented the video to a small crowd that included Branson’s management team.

Eventually, everyone on the island was talking about the startup and word eventually got back to Branson himself.

“The rest is history – he loved it,” Carroll says.

“I’ve been doing marketing for a long time, 20 plus years, and it was one of the defining moments of my career.”

Carroll says if he had tried to use a “rational” approach to sign Branson up to the campaign, it never would of happened.

“I took an emotional response,” he says.

“At the end of the day, there are thousands of entrepreneurs trying to pitch Richard Branson in the UK. But we won the credibility, got to tell our story, created a lot of emotive excitement and got to showcase a brilliant video to say, ‘hey, we want to do this’.”

So far BUCKiTDREAM has more than 10,000 users but Carroll hopes to see that number skyrocket to 10 million by 2018.

As it stands, each user is generating about $3 to $5 in revenue for the platform.

Brands also pay a fee to be associated with BUCKiTDREAM in order to offer special deals to users.

The business could soon have another celebrity endorsement, as it is currently in talks with Ellen DeGeneres.

As for how other business owners should go about getting a celebrity endorsement, Carroll says it’s all about the right timing and finding the right fit.

“It all goes back to the fundamentals that you must have a big idea, a big vision and a lot of passion for what you want to achieve,” he says.

“Then you’ve got to really prepare the right way so the stars align and you get to do your elevator pitch.

“For us, the stars aligned and the timing was right.”