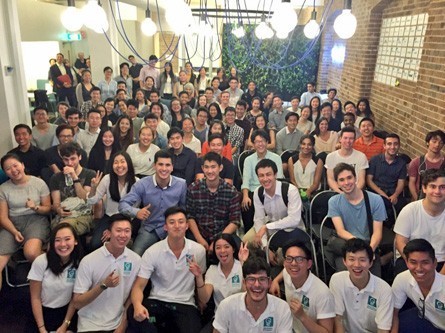 Generation Entrepreneur founders Victor Zhang and Alex Luo are planning to expand their Initiate 48 hackathons so more students can be empowered with the possibilities of entrepreneurship.

The pair put on a hackathon over the weekend which saw 150 students from schools in Sydney, Melbourne and New Zealand create 17 startups in 48 hours.

“The excitement levels were exceptionally high when students realised they could actually change the world and make a difference,” Zhang tells StartupSmart.

Zhang and Luo broke out of institutional learning and started running classes to educate peers on entrepreneurship before launching into the Initate 48 hackathon series when they were in Year 11.

“We are a team of volunteer high school graduates and students,” Zhang says.

“We’ve learned a lot more by engaging in extracurricular activities in the real world than from a textbook.”

On a mission to build a new generation of influencers, innovators and change-makers, Initiate 48 has now gained backing from the likes of Fishburners, Coder Factory and General Assembly.

“The atmosphere was by far one of the loudest and most exciting,” Zhang says.

Students were able to create and present projects to a judging panel including BlueChilli CEO Sebastien Eckersley-Maslin, Sydney Seed Fund partner Garry Visontay and Foundation for Young Australians executive director Andrew Brough, who flew in from Melbourne for the event.

The hackathon resulted in a 14-year-old winning the top prize for GameAlly, a social network connecting gamers with similar interests.

“He experienced a problem and built a solution,” Zhang says.

In addition to pitching for a $20,000 investment, Zhang says the winning student gets three months free co-working space at Fishburners, Coder Factory coding workshops and more.

Designed to leverage the fearless spirit and ambition of young people, Zhang says the “buzz” of their hackathon leaves a lasting imprint on those who attend.

“We’ve had students send us thousand word essays on how Initiate 48 has changed their life,” he says.

Initiate 48 is also working to increase the diversity of students that participate.

Zhang and his team are meeting this week to discuss plans to run more Initiate 48 hackathons.

“We want to empower more high school kids to live differently,” he says.

“They’re less inhibited and not scared to have a bit of fun.”