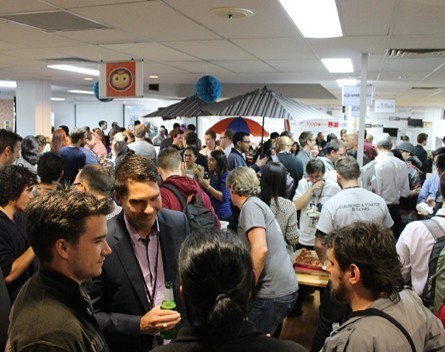 Being based in a co-working space is one of the best ways for startups to grow rapidly and build a network around it, River City Labs general manager Josh Anthony says.

“The most valuable thing is to be working next to other companies at a similar stage where you can learn from each other,” he says.

Anthony says early-stage startups can gain invaluable support in co-working communities because of the abundance of networking and mentoring opportunities.

Anthony says startups in the program have grown their networks 600%.

“Playdate, a social network for mothers’ groups, was very small when it came into the program,” he says.

In addition to quirky social meet-ups like Tuesday juice days, members participate in a range of events to get motivated, develop their ideas and receive coaching.

“We have worked really hard on a balance between socialising and getting stuff done,” Anthony says.

He says RiverPitch, one of their biggest investor nights, allows startups to pitch their business in front of a cinema full of investors.

It is application-only but open to startups in the program.

With more than half of its startup community being in the tech field, Anthony says applicants will be selected on strong technical skills as well as entrepreneurial attributes such as adapting quickly to change.

But the majority of the decision will come down to the team.

“You can grow a business from a basic idea but you can’t do that without a great team,” he says.

For successful applicants, Anthony shares a piece of advice.

“The biggest thing to be ready for is to grow your network, be part of the startup ecosystem, receive feedback and, most importantly, get stuff done,” he says.