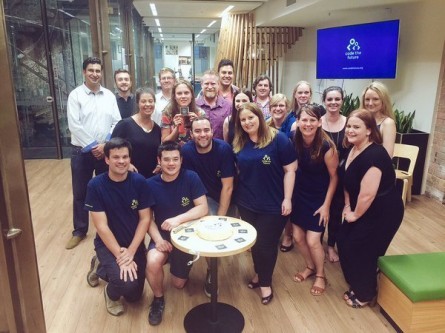 A Melbourne startup has pledged a bold New Year’s resolution: to get 10,000 school students across Australia into coding and create the nation’s youngest community of software developers.

Code the Future co-founder and director Will Egan tells StartupSmart it all started when he saws his sister’s IT homework.

“I realised it hadn’t changed much in the seven years since I’d left school,” Egan says.

Egan decided to approach the school with an offer to teach coding and within a month more schools approached him for help.

“We found that teachers wanted to teach coding, students wanted to learn coding but no one had the knowledge to do it,” he says.

The birth of Code the Future

Egan raised the problem at a Melbourne Knowledge Week meet-up, in 2014, where he met Bec Spink.

Together they developed Code the Future, adapting Airbnb’s model to create a free marketplace for teachers and developers with expertise in coding and tech development to connect on projects.

Managing Code the Future as a side project in addition to full-time jobs in 2015, Egan and Spink saw more than 800 software developers register to volunteer and 2000 teachers sign-up.

“It has grown organically without any marketing,” he says.

Sparking the next generation of entrepreneurs

Inspired to reach more students across the country, the team announced their bold pledge for 2016.

“Our plan of attack is to get as many teachers as possible to register projects and through good community traction to link them with up with experts to start teaching in their schools,” he says.

“The beauty of Code the Future is we take coding into the classroom.”

With concerns about poor digital literacy in Australian schools, Code the Future is paving the way for the new generation to be creators and producers of technology than mere consumers.

“We work with a diverse range of schools both public and private,” Egan says.

“Six months ago, I would have said we are not making progress but with [Malcolm] Turnbull green-lighting mandatory coding in the national curriculum, it has put Australia in a position ahead of many other countries.”

Egan says children aged from six through to Year 12 are learning a range of tech development skills.

“There are so many ways kids can learn and so many different platforms,” he says.

Code for Future offers a diverse range of ICT volunteers from software developers and engineers to graphic designers and more, which Egan says provides an invaluable knowledge transfer for schools.

Closing the gender gap in coding

While there is grave gender disparity across the ICT industry – with women making up just 28% of the workforce – Egan says school students are either unaware of or not discouraged by the discrepancy.

“When you go into a junior or middle school, girls don’t think there is a stereotype around computers and they are not deterred to engage in that education,” he says.

Egan says they have found that girls do respond well to coding when it is taught as a language instead of a tech or game-based subject.

With a goal to make ICT education accessible to everyone and to address the gender imbalances in the field, Code the Future has partnered with Here to There, a Startup Victoria initiative, to bring in successful women from the tech industry to inspire young girls about the opportunities in ICT.

“It’s one of the first reasons we started the organisation, to be honest,” says Egan.

Egan says developers and schools will need to work together, during semester breaks or after-hours, to rapidly scale coding education.

“The challenge we have is that coding knowledge is quite scarce and to make it broadly available at a high quality level, we are going to have to engage existing developers with schoolteachers,” he says.

He implores teachers and developers to volunteer their time to drive this movement.

“Get on to Code the Future and volunteer because you can change the lives of these kids,” he says.

“If one of these kids goes on to create the next Google or Amazon, it’ll be a huge win for the community.”