How two mobile app developers’ love for AFL led to $400,000 in funding 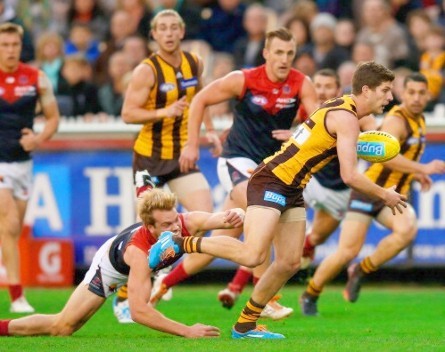 A Melbourne-based mobile games developer has secured $400,000 in funding from a group of prominent investors, after joining seed accelerator AngelCube’s 2013 program intake.

“My co-founder and I have been best mates since uni. We studied at the ANU in Canberra, where the main sports are rugby league and rugby union – the Raiders and the Brumbies,” Tran-Vo says.

“I played AFL in college, so when we moved to Melbourne for work, we went along to a few matches. And it’s just ridiculous – you can get 80,000 to 90,000 supporters in the stadium for a game!

“So we fell in love with the sport, but soon realised there was no decent football manager app for AFL, so we decided to start developing an app. Within about a month, we managed to sign up our first 1000 users.”

The app was initially developed for Facebook app in late 2012. However, following user requests, a version of the app for Apple iPhone and Android smartphones in early 2013, a move that caused business to take off.

“You need to try as early as possible to understand your market and to do that you need to release an MVP, or minimum viable product. There’s also a lot to be said for the lean startup methodology,” Tran-Vo says.

Tran-Vo credits the decision to release the mobile apps, based on user feedback, with eventually getting the team into AngelCube during the 2013 intake.

“We got good traction, but our growth wasn’t fast enough. We applied to AngelCube, which I thought was the best accelerator in Melbourne at the time. That year, they had over 200 applicants – and we were one of seven to get in,” he says.

“They told us to double down on marketing and connecting to our audience, which helped us to climb the app store rankings. They also put us in touch with big-name investors across Australia.”

A key aspect of the development process was to create a basic ‘platform’ that allows a lot of the same basic code to be reused in creating management simulator apps for different sports, rather than creating each one from scratch.

“Around 80% of our tech can be applied to new sports, while 20% is very code specific,” Tran-Vo says.

“We started with AFL because it’s a sport we really enjoy watching. We then created one for rugby league in conjunction with Bauer. It took us a month in development time – it was good timing, coming out ahead of the Rugby League World Cup.”

Since then, c8apps has gone global, launching an aggressive push off the back of football soccer management app Frantic FC. The app managed to pick up over 2000 downloads in just two hours after being tweeted by a cast member of MTV reality show Geordie Shore.

“We’re really attacking the European market aggressively at the moment,” he says.

“We also think Asia is a sleeping giant, so we want to position ourselves there – Japan is very lucrative and China is already in the top five markets for apps.”