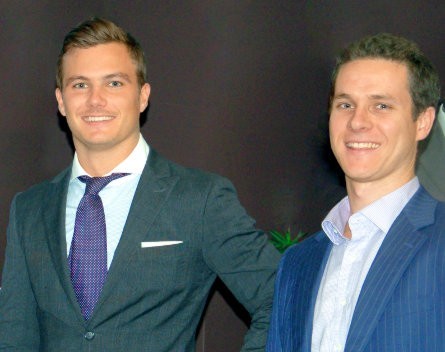 Australian online suit tailoring start-up InStitchu has opened an office and website in London, saying the time was right to disrupt the traditional home of suit-making.

“We were always interested in moving into Europe,” co-founder Robin McGowan told StartupSmart.

“And London is the capital of the suiting industry with Savile Row.”

He says the move to establish a presence in London came after they were approached by British entrepreneur Elliot Suiter, who was impressed with InStitchu’s online tailoring tools.

“He thought the business would do really well over there,” McGowan says.

He says he and co-founder James Wakefield got to know Suiter and they travelled to China to meet his business partner Matthew Hinkley.

“It was about finding like-minded guys,” McGowan says, noting the pair were entrepreneurial, had already started and sold their own business and were both working in the clothing retail industry.

Suiter and Hinkley will be shareholders in the British side of the business.

Establishing an office in London is the latest boost to InStitchu after it acquired men’s custom dress shoes business Mantorii in November and received venture capital funding from Disruptive Capital – the technology arm of Aura Capital Group – which valued the business at $2.5 million.

McGowan says they’re also considering establishing a physical presence in London as well with either a showroom or pop-up shop.

He says while they already ship orders to the United Kingdom through their Australian website, they decided to open an office in London and launch a UK website so customers there could receive the same service Australians do.

Suiter said in a statement that InStitchu enabled him to purchase suits that were a perfect fit for him.

“I knew that if the service had been such a success for me, there’d be other guys in the United Kingdom looking for the same thing,” he said.

McGowan said in a statement that more than 65,000 designs have come out of InStitchu’s online suit customisation tool in Australia.