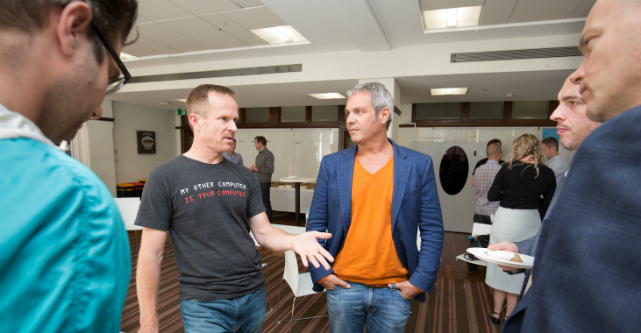 The success of Silicon Valley is partly based on the sharing of information. Can a closed group of business leaders replicate that success?

Currently I’m in the United States interviewing Australian startup founders who’ve moved to the Bay Area on why they’ve chosen to move their businesses in Silicon Valley.

Naturally there’s a whole range of reasons for relocating across the Pacific – for some most of their market was in the US, for others it was the accessibility of investors while for many the move was always part of their plan to go global.

A place you fall in love with

The almost unanimous comment though from the founders was one of the attractions of the Bay Area are the support networks.

“It’s a place you fall in love with straight away – it’s the people and the attitude,” says Holly Cardew. “People ask what can I help you with.”

Cardew, the founder of image management service PixC, sums up the consensus on the Bay Area business culture of ‘paying it forward’. Almost every entrepreneur who’d moved to San Francisco mentioned how the question “how can I help you?” was key to building a network and finding customers, staff and investors.

That openness to helping the ecosystem was greatly appreciated by Carl Hartmann, co-founder of logistics startup Temando.

“I’m here today because people were kind enough to pay it forward,” he states.

Since then Harmann has become one of the ‘go-to guys’ for Australian entrepreneurs arriving in San Francisco and almost everyone we spoke to mentioned Carl as being a great help for them in obtaining initial introductions.

Those introductions and helpful acts are essential in a community where the most valuable asset is the people, not just investors but the entire complex ecosystem of coders, lawyers, publicists, designers and various other disciplines essential for an industrial hub to thrive.

Which raises the question about yesterday’s announcement of the TechSydney initiative, a project claiming “to address the Sydney innovation ecosystem’s greatest challenge: collaboration”.

This is a good idea, and one this writer was involved in seven years ago with the failed Digital Sydney program in 2010 which aimed to bring together the disparate groups that make up Australia’s disparate tech and digital media sectors.

Digital Sydney failed because the state government is poor executing at such initiatives so the fact TechSydney is being led by experienced startup founders, investors and advisors should give hope this attempt would be more successful.

However, TechSydney’s press release quickly dispels that hope with the opening line.

The “Australian Silicon Valley” line shows a focus on the current Bay Area tech startup model funded by venture capital and seed investors who are happy to forgoe profits in the hope of big capital gain when the business is acquired or goes public – the Silicon Valley Greater Fool model.

Silicon Valley itself is pivoting away from this model with businesses across the Bay Area now frantic to at least have the illusion of being profitable or on the path to making money. In narrowly promoting the tech startup model TechSydney seems to be trying to catch a wave that has already broken.

The main worry from the TechSydney announcement though is that it seems to go against the open door policy that makes Silicon Valley so successful. Rather than encouraging questions and new entrants, TechSydney is slamming the door shut with only the successful and well connected invited.

The group will launch at an exclusive invitation-only dinner on May 30 at the Powerhouse. Sydney’s top 200 technology companies will be in attendance. The first 100 have already been invited, and the group is now taking applications for the next 100 attendees at TechSydney.com.au, and is urging companies to register their interest today.

In some respects this is to be expected of the Sydney business community – the city’s industry is based upon the Rum Corps model of the colony’s early days where success is based upon connections and influence rather than being open and collaborative. This attitude underpins the ‘mates culture’ that is critical to acquiring power and wealth in New South Wales and across Australia.

With an attitude of having an ‘invite only’ group leading the push the hopes of creating an ‘Australian Silicon Valley’ are doomed. By locking out new entrants or dissenting thinkers, it’s impossible to create a vibrant hub.

For Sydney, or any other Australian city, to succeed as a global hub in any industry that legacy of the Rum Corps, the mates network, needs to be suppressed and a more open, collaborative mindset put in place.

TechSydney can do that if its leaders choose to do so. Hopefully at their invite only meeting at the end of the month the wise men of Sydney’s tech elite will decide that an open initiative that welcomes newcomers and tolerates new ideas is the best opportunity to make the city a global leader.