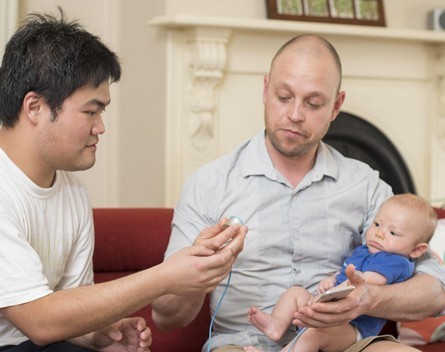 Despite doing the rounds in Silicon Valley, it was when the CliniCloud founders returned to Australia that an investment fell into their laps.

The Internet of Things healthtech startup has secured a $5 million seed round led by China’s largest internet company Tencent, and co-founder Hon Weng Chong says it was the investor that came to them.

“Rather than an outbound one, this was more of an inbound request,” Chong says.

“We were up in the Valley this time last year meeting with VCs and investors. We didn’t have time to complete the round so we came back to Australia to launch. Then we caught the attention of Tencent.

“They engaged us really early on, and they’ve been really supportive.”

CliniCloud’s first product, which is yet to be shipped, is a medical kit including a digital stethoscope and non-contact thermometer. This connected technology allows carers and patients the ability to measure important medical information in their homes, and then send it to a doctor or specialist.

The capital injection will be used mainly to roll out this first product, and CliniCloud already have a huge partner on board to help out.

Best Buy will be stocking the startup’s products in the US and Canada from as early as this year. CliniCloud will be launching in Best Buy Canada in November and in the US in January next year.

It was a relatively quick process getting the major distributor which has over 1000 locations on board, Chong says.

“They pretty much agreed on first meeting, so it was more a matter of logistics and all the other different pieces that go into that,” he says.

The funding will also be going towards expanding the team, enabling further international expansion, and working towards future products.

Chong says it’s important for startup founders not be swayed by initial rejections.

“You’ll get very many nos before you get a yes.

“Don’t give up, keep going, keep trying and something eventually will happen.”

Waiting for change in Australia

Although the entrepreneurs are both based in Australia, the product won’t be available here in the short-term future, with the company still looking for the right tele-medical business to come on board.

“We’re waiting for the right partner and for the government to decide how tele-medical reinvestment will go in the future,” Chong says.

“If you were living out in the bush you’d have to go to a GP first, you can’t do a direct call with a specialist or GP from your home.

“Hopefully we’ll see a lot more progressive thinking, and with the leadership change that might be sooner rather than later.”

Chong and his fellow co-founder Andrew Lin both turned away from becoming doctors to work on the startup, a decision that now seems to be paying off, despite initial concerns from their parents.

“It’s always been the right decision for us,” Chong says.

“I’ve always been passionate about technology and medicine. I tried to figure out how I can combine these two areas, and I have a great sense of pride and achievement being able to do this.

“It doesn’t feel like work. It feels like a long and great side-project that keeps on going.”