Is there a formula for making your startup go viral? 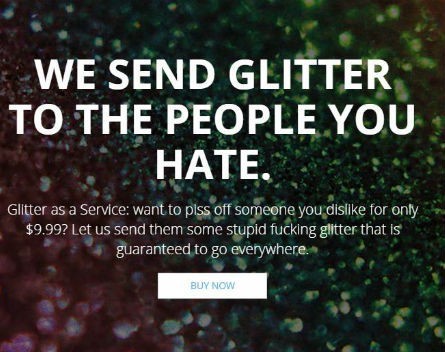 Within hours of being featured on Product Hunt and Reddit, the startup’s website crashed due to being bombarded with server requests.

While the site is now back online, purchasing has temporarily been suspended while founder Mathew Carpenter works through the backlog of orders.

Many social media users commented on the site’s excellent copywriting, which doesn’t hold back.

“Pay us money, provide an address anywhere in the world and we’ll send them so much glitter in an envelope that they’ll be finding that shit everywhere for weeks,” the startup’s website reads.

So is having a quirky idea and cracking a few jokes enough to go viral?

Alex Wain, founder of media startup So Bad So Good, told StartupSmart it’s always possible to gain a large amount of traction – however, he doesn’t believe there is a strict formula for getting your business into the spotlight. Last year, one of the entertainment site’s Facebook posts reached around 60 million people.

“You could drive cheap traffic to watch your video on YouTube, potentially gaining millions of views, but does that mean it’s gone viral?” Wain asks.

“I don’t think anyone has found the secret formula, that unique combination of the perfect headline, striking image, emotional response and moment in time. If they had, you’d constantly be seeing the same three to four campaigns from brands being shared in your feed.”

However, Wain says companies are certainly getting smarter and more proactive when it comes to creating engaging content.

“From there it’s about building that relationship and on-going trust with them, so they continue to share and engage,” he says.

“Like any relationship it takes time, but that’s the key to building a community that has real value.”

“Remember, everyone started at zero once,” he says.

“You don’t have to be across every single platform known to man – choose which is right for you and find your niche. But once you’ve chosen them, be present, be engaging and always be responsive. If you’re not, why should your customers?”

As for what So Bad So Good has planned for 2015, Wain says he and his co-founder will be launching a redesign before the middle of the year that focuses on a more mobile-friendly interface. In addition, the site will be opening an online store in the next coming weeks to bring in revenue.

“Fashion and online retail is an area we’ve never ventured into before but it’s a natural extension of the site itself, actively supporting creativity, individualism and pop culture,” he says.

“And finally we’re looking to lock in our first round of funding by the middle of the year and from that, hire two to three individuals to help us continue to grow the business.”