Is this Silicon Valley success story a tech revolution in healthcare or marketing hype cloaked in secrecy? 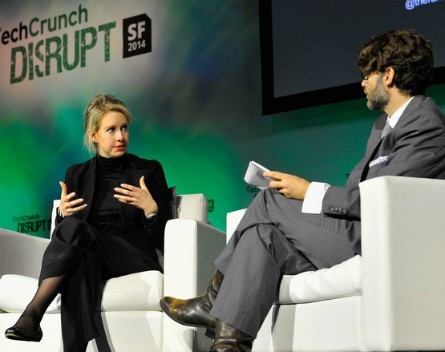 If one company were to symbolise the entire ethos of Silicon Valley, it would be Theranos.

Founded by Elizabeth Holmes who was 19 at the time, the company set out to “reinvent” the laboratory blood testing industry by using “revolutionary finger-stick technology” which would make testing hundreds of different tests possible from blood obtained by a single prick of a finger.

Elizabeth Holmes fulfilled the stereotype of the quintessential Silicon Valley CEO. She was a Stanford University dropout, joining the two most famous CEOs who never completed higher education; Steve Jobs and Bill Gates. She is a vegan and wears black turtlenecks, just like Steve Jobs.

And finally, she talks about how technology, and her company in particular, is going to revolutionise the healthcare system to bring about an end to chronic disease and save lives.

The story is so close to the archetypal Silicon Valley success story that Theranos has so far raised $400 million dollars, valuing the company at $9 billion.

In part, the illusion of Theranos has been maintained by the company keeping much of how it operates a closely guarded secret. This has made it very difficult to assess the validity of both its claims and that of the growing chorus of criticism aimed at the company.

Theranos claims that its uses its patented “NanotainerTM Tubes” that together with its own testing machines and software, makes running “hundreds” of tests from very small amounts of blood a possibility. This technology will allow it to offer tests at a much cheaper price than traditional testing companies and deliver the results much quicker and direct to the consumer.

The most vocal of the critics has been investigative reporter John Carreyou of The Wall Street Journal. In October of 2015, Carreyou first wrote about the behind-the-scenes problems Theranos was allegedly having getting its technology to work. In particular, there were leaks of problems with the tests’ accuracy and the fact that the “vast majority of its tests” are done with traditional machines manufactured by companies like Siemens AG.

More recently, The Wall Street Journal has reported that US health inspectors have found serious deficiencies at a Theranos laboratory in Northern California. If not resolved, the laboratory could be suspended from the US Medicare program. The report also suggested that Theranos were potentially subsidising the real cost of testing that it was getting external labs to perform.

For its part, Theranos claims that its aim to have all of its tests be able to be run from a small finger-stick sample of blood is “aspirational”. In the meantime, the US Food and Drug Administration (FDA) has declared that the Theranos “nanotainers” are an unapproved medical device and require regulatory approval to be used. So far, only one test, a test for Herpes Simplex Virus (HSV-1), has been approved by the FDA. Theranos CEO, Holmes has stated that it is the company itself that is seeking FDA approval for its tests to prove their validity.

Further criticism of Theranos has come, ironically enough, from a Stanford University academic John Loannidis who has written about the problems of not having scientific peer-reviewed publications as the basis for validating the claims of Theranos. Loannidis sees the problem of what he calls “stealth research” carried out by startups like Theranos as creating ambiguity:

“about what evidence can be trusted in a mix of possibly brilliant ideas, aggressive corporate announcements, and mass media hype”

Without scientific publications, Loannidis believes that the validity of the claims made by Theranos can not be assessed, and that the public:

“will not be able to judge whether some proposed innovation is worth $9 billion, $900 billion, or just $9—let alone if the innovation will improve the health and well-being of individuals”

A more detailed critique of the claims made by Theranos has come from Dr Eleftherios Diamandis who works at the Department of Laboratory Medicine and Pathobiology at the University of Toronto. He points out that much of the cost of laboratory testing is a result of overheads of staff, transportation and handling. Something that Theranos is not particularly addressing with its technology.

It is worth noting that finger-stick testing is not actually new and there are a range of devices that can be used to carry out a variety of blood tests such as cholesterol for example.

The main issue is that although these levels are correlated with levels found in blood obtained using a syringe, they are not necessarily the same. This is one of the many reasons that testing such as that proposed by Theranos should be subjected to scientific scrutiny.

Holmes is right in suggesting that laboratory testing should be regulated and laboratories should be held to accepted and validated standards. However, she is not advancing this cause by maintaining the veil of secrecy that enhances the company’s standing with venture capitalists over any true advances in healthcare.