It officially exists: The challenges of a public release 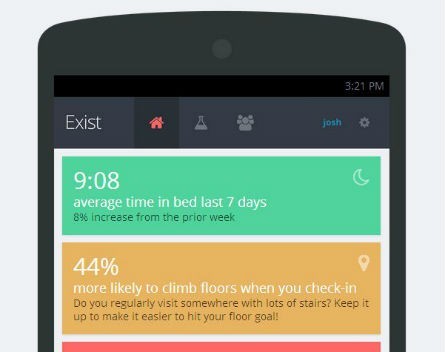 The Exist web app works by connecting to other services its users already use and helps them understand their lives by analysing the links between their personal data.

Cooper clarifies that the personal analytics platform is not an activity tracker or a tracker for trackers.

“That data could be related to health and fitness (e.g. fitness trackers), lifestyle (e.g. Foursquare check-ins), entertainment (e.g. last.fm and scrobbles) or productivity (e.g. RescueTime and Gmail are popular requests.

“From analysing that data we can show you which correlations exist between things you do, and give you actionable insights into your habits in simple language.”

Earlier this year, StartupSmart reported Hello Code successfully ran a private beta round for Exist with 22 users, with Twitter forming a key part of the feedback process.

Since then, according to Cooper, the startup has passed a number of key milestones.

“Our waiting list doubled, we took on 150 early backers on a discounted yearly plan to test the private beta, we introduced the first version of our data insights and opened up our $6/month subscription to the public,” Cooper says.

With the workload increasing as a result of the launch, Cooper says prioritisation is an increasingly important skill.

“Being open to the public seems to triple the workload immediately, so it’s important to prioritise carefully and only work on the most important things, she says.

In recent months, the broader self-tracking and wearable device trend has gained a lot of mainstream attention, with Samsung including a pulse tracker in its Galaxy S5 smartphone and Apple unveiling its HealthKit platform at its Worldwide Developers Conference.

Cooper says that while HealthKit is a great example of the increased visibility of self-tracking for mainstream consumers, unlike Exist, it is confined to collecting personal health data.

“Our aim is to not just collect your data but to do the heavy lifting of analysing it for you and turn it into information you can understand and act on. We’re also focusing on a much broader set of data, since the things you do every day are all connected somehow, even if they don’t fit under the ‘health and fitness’ heading,” Cooper says.

“We believe one of the issues is that having data about yourself is useless when you don’t know what to do with it—that’s what we’re trying to solve. We also expect to see self-tracking hardware continue to evolve to track more data, and to be more accurate.”

Going forward, Coopers’ focus is on improving our product and providing additional value to users.

“We’re working hard to make our insights more clever, and to make them actionable. It’s much easier to take action on a healthy choice if someone suggests it to you and it’s small and simple. Once we’re confident in the insights we’re finding, we’ll move into developing native mobile apps (right now Exist is a responsive web app),” Cooper says.