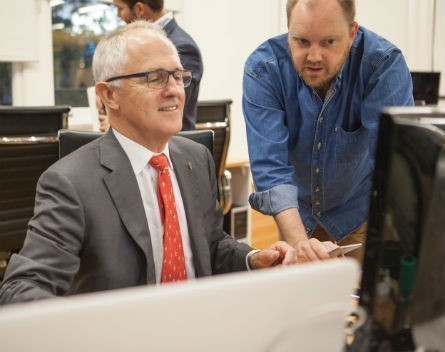 “You need to believe in yourself. Everyone I talk to thinks that the problem is that academics… their incentives are very much associated with publish or perish.

“I have to say to you as the Vice-Chancellor of one of our most important universities don’t be defeatist. You’ve got to be as optimistic as your students, otherwise they’ll lose faith in you.”

This was Prime Minister Malcolm Turnbull last week at the Melbourne Institute’s Economic and Social Outlook Conference, challenging the University of Melbourne’s Glyn Davis’ lament during a panel discussion that there was a structural problem with Australia lacking the large corporations that invest in R&D in developing products.

It is a good sign that Turnbull is upbeat about innovation (“Be bouncy,” the PM also said); but he appears not to understand that innovation is not a matter of pressing the right button and expecting that change will happen.

The situation we are faced with today, with Australia still struggling to commercialise its research, is the result of many years of both policy neglect and policy mistakes. Doing good research is not enough. Without Australian-based firms that can take that research to the next stage, good ideas will either go offshore, or die out.

Internet businesses are a case in point.Nascent Australian businesses must go offshore to make the contacts, find the investors and recruit the engineers and marketers that they need. The ecosystem of locally-based companies, and the know-how that they nurture and develop over time, is lacking.

Why so few technology-based firms?

The reasons are many, but fundamentally it goes back to technological cringe (if it’s invented here, there must be something wrong with it), and a belief (cemented into the public service) that any policy (such as supportive public purchasing) that assists an Australian firm to do anything at all is “protectionist”.

The public policy palette is monochrome as a result, reduced to tax breaks, and deregulatory mantras. It is not as if “leave it to the market” ideas have not been contested when it comes to innovation. They have been. There have been many studies over the years that have pointed to the inadequacies of policies towards industry and business that focus on costs and little else.

But the econocracy in Treasury rides on, unscathed. Because innovation relies on adaptation and learning, as much as on good ideas, one missed opportunity often leads to another. While they talk the talk, when it comes to decision-making, the culture of Australian government departments is of little practical help. Too many in Defence, for example, one of the biggest technology spenders, consider industry to be “the enemy”, and the task of managing technology-intensive projects to be a matter of tying down every detail, lest advantage be taken.

Defence personnel who leave the bureaucracy and work in industry for a while, or who are taken on by firms keen to sell to Defence, quickly learn how counterproductive this departmental culture is, producing cost blowouts but little progress. It is not uncommon for Australian companies to find that their products and services are easier to sell in the UK or the US, indeed almost anywhere in the world, than they are in Australia.

There have been numerous innovation-related statements produced in this country over the past 40 years. None has led to fundamental change, because the relationship between innovation and industry development has not been understood. Well-intentioned efforts to boost the supply of venture capital end up achieving very little, because the innovation system (that is, the network of connections, experience and support, nestling within a serious bipartisan policy commitment) remains undeveloped.

So, where to now? The answer does not lie with universities, which should stick to teaching and research, and aim to do both well. For academics tired of being regarded as performing monkeys who will do anything, anywhere, anytime to get a promotion, sticking to the knitting might make a refreshing change.

Treasury is right about incentives. It is silly to think that incentives (such as tax concessions for research and development) will do the trick. Incentives will not produce their intended effects when key components of the system to take them up are missing. All that happens is that they substitute for spending that would have happened anyway, or they are simply rorted.

So, work needs to be done on the innovation system, starting with the issue of “growing” companies and supporting those which have (despite massive discouragement) reached a size where they are in a position to do more. It means patient work, and a sensible sharing of risk between public and private.

Researchers often bemoan the reluctance of business to invest in their ideas. Business, in turn, bemoans the naivete of many researchers who think they are on the way to riches with only a prototype. It is no accident that the two best-known technology-based companies to have originated in Australia – Cochlear and CSL – are in the medical field. There is public interest, a history of flexible government support, and a tradition of working across boundaries. We need these same ingredients in other fields.

These are not messages political parties want to hear, because they require thinking beyond the next election. Ministers come, and ministers go. Too often, they want to score political points, they want instant results and they are reluctant to listen. Subtle, patient policies that produce virtuous circles are not the kind of thing that makes a catchy headline or photo opportunity.

Nor are they messages most senior public servants want to hear, because promoting the right sort of relationships with business, means actually venturing out into the real world, and taking some responsibility for outcomes. Neither politicians nor bureaucrats are much interested in learning from the past. The square wheel of faulty innovation policy is endlessly re-invented.

Turnbull may yet be the circuit-breaker. He has business experience, and he is very bright. Let’s hope he is prepared to listen, and to start the work, in consultation with Labor and the Greens, to begin to put the building blocks in place for a functioning, industry-oriented innovation system.

Jenny Stewart is a Professor of Public Policy at UNSW Australia.