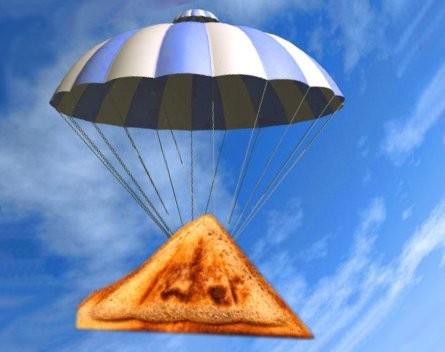 Mini-parachutes were attached to pre-ordered jaffles and set free to float from a balcony in Melbourne’s Flinders Lane last week, as Jafflechutes ran their first experiment.

Just over 60 jaffles were delivered, and co-founders Adam Grant and David McDonald are still deciding if they want to continue to explore the idea.

“If we plan to do it again, we’ve got it all down pat now. Immediately after the event, my first reaction was never again, as I was bit overwhelmed by the whole thing,” Grant says.

“If we were to do it again in Melbourne, we will be looking to legitimise it. This was just about trialling parachute designs and the actual jaffle part of the whole thing to see if it worked.”

Grant told StartupSmart the event had happened simply because no one said no.

“We’re not actually a legitimate business really, we only started looking into all the licenses and stuff a few days ago. But we were tossing the idea around, and there was just no one there to shoot it down,” Grant says.

Despite the casual nature of the project, Grant says his team had brainstormed all the worst possible scenarios and did everything they could to avoid accidents and injuries.

“It went really well. Even things like wind that should have hindered the experience actually made it better because it created a lot of suspense. It was like listening to a pantomime from our balcony. There were lots of “ooohs” and “ahs” and spontaneous applause. It was really lovely,” Grant says.

Grant had already created the mini-parachutes for an earlier idea so people could parachute forgotten pairs of keys from high-rise homes to key-less housemates below.

“I thought we could sew them into jeans pockets, so no one would hurt their hands. So yeah, it was a dumb idea but we did make the parachutes,” he says.

The Jafflechutes start-up was well prepared to go viral, but Grant says the rate at which it took off was exciting.

“We launched the website and it didn’t get a lot of traffic. So we created a Facebook and Twitter account the next day,” Grant says. “When I went to bed that night there were 10 orders, and I woke up to 30. After I rode my bike to work, there were 60. I kind of freaked out and shut down the orders, 60 was always the most we could do.”

Grant and McDonald are exploring mobile food licenses, insurance and the steps they need to take to make it an ongoing business.

“It’s only in the last few days that we started researching it. As a legitimate business it may lose some of the fun, and fun was the point. From beginning to end, even scraping cheese of my table was just so great,” Grant says.