Kaggle president on how they did it, and tips on how to tell your start-up’s story to raise millions from investors 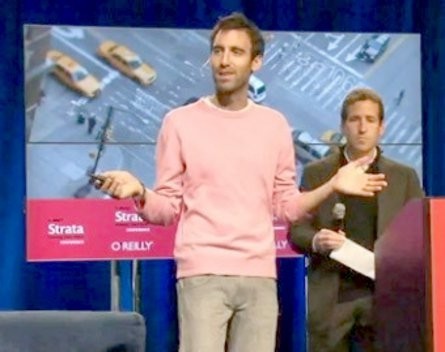 Data science platform Kaggle grew from a Melbourne start-up to a global success story in just a couple of years.

Now based in Silicon Valley, Kaggle president and chief data scientist Jeremy Howard spoke to StartupSmart about how they grew, how they raised $11 million in their first round of funding and why they’re not keen on setting goals.

“It’s been extraordinary. From the outside you only see what works, but from the inside it’s even more exciting because you know the 99 things that didn’t,” says Howard.

The Kaggle platform connects companies seeking data analysis to over 100,000 data scientists through competitions. The data scientists aren’t employed by Kaggle, but are competing for significant cash prizes.

They ran their most complex competition so far with General Electric a few months ago, using extensive flight and weather data to predict flight times.

“The phase two competition will take the winning model from phase one, and use that to create a simulation of flights. And this time we’re not just asking people to predict flights, we’ll be asking people to recommend and recalculate the optimal route,” Howard says.

“We only need to do one thing to keep the data scientist community ticking, we just need to give them a good diet of interesting data sets and projects,” he says.

Kaggle has a team of three top-level Kaggle contestants working on sourcing and configuring the competitions.

The idea for Kaggle emerged in 2010 when chief executive and founder Anthony Goldbloom was writing for The Economist and realised everyone he was interviewing had the same issue – finding good scientists to analyse their data.

Goldbloom noticed the Netflix Prize, a data analysis prize offering a million dollars in prize money, attracted 70,000 entrants and thought the competition model may be a good way to bring top data-wrangling talent together.

Howard became the first angel investor in Kaggle after he met Goldbloom at a statistics meet-up in Melbourne. Howard had been competing in Kaggle competitions and had become the number one participant in the system.

After 18 months, Howard and Goldbloom had a developer in India and a part-time graphic designer. They were ready to take the next step, so Goldbloom and Howard flew to Silicon Valley to raise funds.

“We had no revenue or very, very little. We had run maybe 20 competitions and we had maybe 15,000 data scientists registered on the site,” says Howard, who adds it felt like they’d read every book and article about fund raising in preparation. “We’d never been to Silicon Valley, never raised money, and we didn’t know any venture capital investors.”

But their self-education and determination paid off, and they raised $US11 million in three months, from Index Ventures, Khosla Ventures, a large investment from PayPal co-founder Max Levchin and 12 smaller investors.