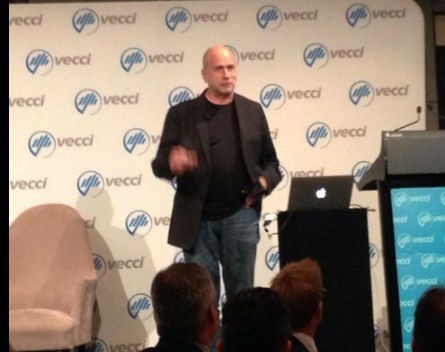 Tried making a call on your Mobi, TelePod, TriPod or iPad lately? These are just a few of the names which were considered for the device which eventually became the iPhone.

Ken Segall worked alongside Steve Jobs at Apple for more than a decade and this anecdote is how he started his keynote address at yesterday’s Victorian Chamber of Commerce and Industry business leaders’ lunch.

Segall is the man who came up with the concept of branding Apple’s products with an i. He also created Apple’s iconic ‘Think Different’ campaign and earned the respect of a client with “absurdly high standards” – Jobs.

Apple was close to bankruptcy and in “really bad shape” before Steve Jobs returned in 1997 to the company he founded, according to Segall.

“Steve came along and did what he did to it and a mere 14 years later Apple was the most valuable company on the face of the earth,” says Segall.

Segall believes the secret of Jobs’ success at transforming Apple was the concept of simplicity.

“The reason why it works is the world is a very complicated place and if you do something that is simpler, it stands out,” Segall says.

These are Segall’s tips for making your business simpler:

1. Understand what your business is

When Jobs returned to Apple in 1997 Segall created a campaign called ‘Think Different’.

“We didn’t show any computers in it and there was a reason for that: we didn’t have any computers,” Segall says.

But the key to the campaign was to tell the world Apple was being revitalised. In planning an advertising campaign, usually a lot of time is spent trying to identify what the business is.

At Apple, Segall says there was no need to have meetings to determine this.

Everybody knew what Apple stood for: “Steve just said find a way to communicate it.”

In Jobs’ mind the reason for keeping things simple was all about love.

“It was our job to get customers to love Apple,” Segall says.

“He wanted to form this connection and loyalty which is something Apple has always excelled in.”

If people love you they will keep buying your product, they will evangelise to their colleagues, and when, inevitably, bad things happen, they will get over it.

Segall says this is true for Apple which “has had its share of misfires” most recently Apple Maps, but people have stuck with Apple.

3. Keep the focus on your product or service

“From my own experience I actually verify this. When I worked at Dell and Intel, 80%, 90% of our meetings were always about metrics,” Segall says.

“Whereas at Apple there was not one single meeting where we ever put any sort of goal like that on our heads. It was always do the best job you do, do something great.  There was a profound sense that Apple exists to make great products.”

“Being simple isn’t simple,” Segall says. “It takes a special type of person and the commitment of time and money to focus on being simple.”

Segall says you need brains and common sense to achieve simplicity and Jobs had both of these.

“What really impressed me about the man is that he had amazing common sense,” he says.

“Often the right choice is pretty obvious but often what happens in the world of business is that it costs more money or will take more time… but Steve didn’t care about that. He would say that’s what I want so you are going to have to figure out how to do it quicker for less money.”

5. Minimise the number of products or services you offer

Segall says most businesses offer too many products and services.  In comparison, at Apple there are only five models of laptop.

When Jobs rejoined Apple there were a multitude of products but within six months he had got rid of virtually all of them.

“Steve Jobs killed the entire product line at Apple. I don’t think any company has ever done that,” Segall says.

When you are trying to keep things simple, Segall recommends minimising your words. When the iPod was released the advertisements didn’t drone on about the technical specifications of the product. Instead the tag line was “a thousand songs in your pocket”.

“When you say something succinctly and directly and don’t try to embellish it you sound a lot smarter,” Segall says.

“The great thing about simplicity is that it never fails, it is the one foolproof thing in this world.”