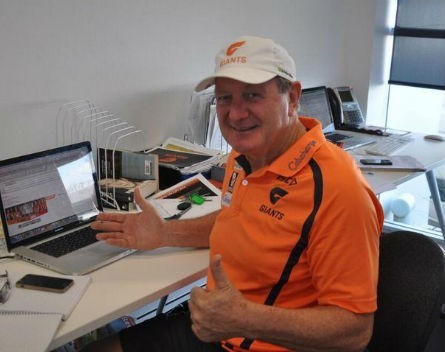 He’s a household name in Australian rules football, but Kevin Sheedy also knows a thing or two about entrepreneurship.

Speaking at the Australian Private Equity and Venture Capital Alpha conference in Melbourne at the end of last week, the long-time Essendon coach and one of the founders of the Greater Western Sydney Giants shared some of his business and sporting wisdom with an audience of private equity and venture capital professionals.

While the charismatic coach poked fun at rival clubs (Richmond) and coaches (Carlton’s “grumpy” Mick Malthouse), he spoke passionately about the importance of innovation and planning for the future.

“Don’t rush it,” says Sheedy about starting a business from scratch.

“Arriving in Sydney five years ago, we had no team, no CEO, no chairman, no board and no players,” says Sheedy.

“So I spent three or four weeks driving around Sydney looking for forty-five 18 or 17-and-a-half year-olds without driver’s licences.”

“We had a lot of work to do. You’ve got an opportunity to build a new club: we’ve got to have membership, financing, we got a new stadium … and of course you’ve got to find the superstars that will fill that stadium in five years.”

“We need to make sure the building of this club is absolutely not rushed at all,” says Sheedy.

“We have to be the most different club in any sporting association in the country if we are going to fill that stadium.”

And success isn’t about getting things right 100% of the time, Sheedy says.

“We don’t always get it right, and we miss many opportunities … and that happens in business too.”

“A classic case of that … is why would you have the MCG for 80 years with only one football club playing there? So I try to go after the business we don’t see.”

2. Think about the kids

For Sheedy, building Greater Western Sydney isn’t about getting supporters his own age involved, it’s all about the younger generation. And the same can be said for businesses looking to secure future generations of customers.

“We are after the next generation … we’re not after people my age or even 50, we are after primary school kids,” says Sheedy.

“We want them to know: we’re the best game for you.”

While having a strong team is an obvious item on the to-do list of any sporting coach, Sheedy says it’s important not to overlook the behind-the-scenes players.

“I’m looking for disruptive people all the time,” he says, listing the likes of Dermott Brereton, Buddy Franklin and Gary Ablett as just some of the high-profile “disruptors” of modern day footy. And that’s why he tried to sign Franklin to GWS.

“But when you see good people, keep them around. Don’t dismiss them,” he says.

“Most of the people we bring into the Giants, we try to keep them and develop them. If we can find the one person who is a ‘gold nugget’ who can make our club grow, we’re in business.”

Sheedy spoke at length about the need for innovation in the AFL—from the introduction of the annual ANZAC Day clash between Essendon and Collingwood in the 90s to his idea of playing the first round of each season in another country to generate interest in the game among international sporting fans, and give AFL revenues a boost.

“You can change the rules for the better,” Sheedy says.

“ANZAC Day was there for 80 years before we grabbed it. Why didn’t we see that earlier? So are you missing the fields in business that you should pick up?”

Sheedy would also like to see one week dedicated to all the football codes in Australia, with rugby, soccer and AFL games played at the same stadium and broadcast around the world.

“All you have to do is move the goalposts, change the boundary lines,” he says.

5. Fight til the end

Sheedy’s success story as an AFL coach is one of perseverance and he told the room that he won’t stop until the AFL recognises the need for overseas investment in the league.

“To me it’s all about the future and how you prepare for the future,” Sheedy says.

“And I will hammer the AFL relentlessly until we get it right. We must get outside money into this code. We must sell the game to the world.”