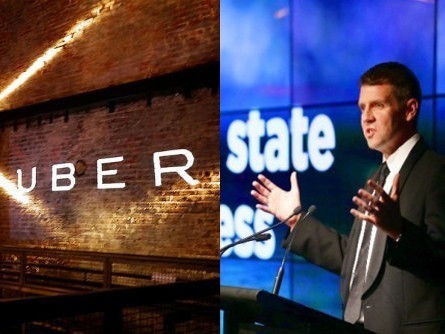 The Daily Telegraph reported on Monday morning that Uber drivers will soon be forced to pay a licence fee and will also undergo more rigorous background checks. It says NSW is set to follow in the footsteps of the ACT in regulating Uber and providing a series of concessions to the taxi industry.

But speaking to 2UE on Monday morning, Baird said that while an advisory paper on the topic has been received, it is yet to appear before cabinet.

“What we’ve agreed to do is have this issue looked at,” Baird said.

“The taxi industry is effectively 6000 small businesses and they have bought into this industry on the basis of significant upfront investment. So it is a challenge when new technology like this comes along.”

A statement from the NSW Taxi Council also says the report is “premature”.

“Taxi licence owners have invested in the NSW Taxi Industry in good faith under laws established by government and upheld for many decades and, like other industries that have undergone micro-economic reform that has had negative impacts, compensation and structural adjustment must be part of this process,” the statement says.

But the Daily Telegraph report quotes a government source as saying the changes are “inevitable”.

Taxi licences in NSW currently cost up to $300,000 and the proposed changes would see this price fall drastically to make up for the lost exclusivity.

UberX drivers will also be banned from using cab ranks and picking up passengers that haven’t booked through the smartphone app.

“We welcome reports today that the New South Wales government is listening to the hundreds of thousands of people choosing ridesharing in the state and propose to open up choice and opportunity to its citizens through specific ride-sharing regulations,” Rohrsheim says.

“We look forward to seeing the detail in due course and fully expect that any regulations will be safely based and made in the consumer interest, rather than to appease the incumbent industry.”

The eventual regulations are likely to be very similar regulations as seen in Canberra, where Uber formally launched at the start of the month.

In the ACT, Uber drivers must pay $50 for accreditation and an annual licence fee of $100, as well as undertake compulsory criminal history checks, background checks and obtain third-party insurance.

The ACT also gave some compensation to the cabs, reducing fees from $20,000 to $5000 by 2017 and drivers will no longer be forced to wear uniforms.