Lego car, running on air and heralding an international revolution arrives in Melbourne 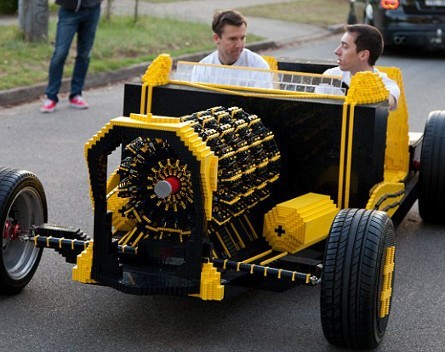 An international partnership between a Romanian hardware hacker, an Australian entrepreneur and over 40 patrons has reached its pinnacle with the arrival of a car made entirely of Lego with an engine powered by air in Melbourne this week.

Project coordinator and serial entrepreneur Steve Sammartino has been working with Raoul Oaida for over a year on the project, which has seen the Lego car make a transcontinental trip.

Sammartino told StartupSmart the car was testament to the start-up revolution being a global one.

“Everything cool that happens outside of Silicon Valley shows start-ups are a global revolution,” he says.

“The way this project came together shows that linking of like-minded people via the gifts the internet gives us is more powerful than any geographical location.”

Sammartino says the time has come for start-ups to stop thinking about their local community and tap into the global movement, forging partnerships across borders.

“I’m hoping it’s the end of the geography obsessions,” Sammartino says. “I would love us to stop thinking and talking about the Melbourne or Sydney start-up communities. It’s not about Silicon Valley versus Tel Aviv, Los Angeles versus Chicago communities. It’s not about where you are, what school you went to. It’s about the connections we can have.”

Oaida has returned to Romania, and the car remains in Melbourne in a “secret location”, but Sammartino says they’re open to offers.