Is another tech wreck coming? Some insights from Netslaves author Bill Lessard 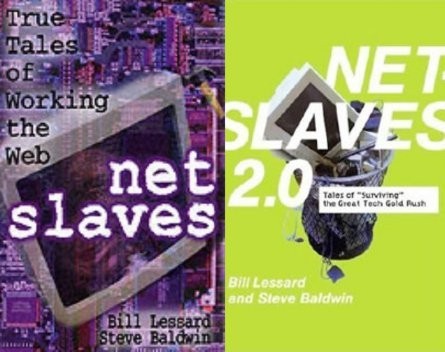 In recent weeks, many commentators have pointed out the similarities between the current Silicon Valley scene and the tech boom of the late ‘90s. Meanwhile, recent falls in tech related stocks have led some to fear that another dot-com crash could be around the corner.

A first-hand witness of the tech boom of the late ‘90s was author and web pioneer Bill Lessard.

The books led to the creation of a pioneering and now defunct online community called Netslaves.com, which bought together many people connected with the tech startup scene.

StartupSmart spoke to Lessard about how the current US tech startup scene compares to the ‘90s tech boom.

Working the web in the ‘90s

According to Lessard, working in a tech company in the US during the late ‘90s was often the opposite of the hype portrayed by many in the media.

“For every [Netscape founder and venture capitalist] Marc Andreesen getting rich quick, there were thousands of people getting old fast. The situation was ridiculous. It was akin to saying that everyone who moves to Hollywood becomes Brad Pitt or Angelina Jolie,” Lessard says.

“And it wasn’t just your mom who was falling for such nonsense, either. Otherwise perfectly reasonable people I’d meet at parties would gush when I told them what I was doing for a living.

“After a while, I wanted to punch such people on sight. Working the Web 1.0 was 14-hour days, not cleaning your apartment for six months, having three different jobs in the course of a year.”

Many people cite the infamous takeover of media giant Time Warner by tech company AOL as representing the pinnacle of the hype surrounding the early web.

Lessard says it was the experience of a round of layoffs at Swiss bank UBS that led him to write the Netslaves books.

“I was getting downsized from my seventh job in seven years when I looked up a friend of mine from Time Warner. I was 32 at the time. I was way past my Web 1.0 due-by date.

“I wanted to do something different. It was Steve’s idea to write about this industry. I added the Studs Terkel aspect of profiling the real people who power tech.”

The books led to the creation of Netslaves.com, an online community filled with the tales of disgruntled employees from tech start-ups. However, it wasn’t just IT workers who visited.

“It was a sterling example of online community in the pre-Facebook era. There were disgruntled techies, sure. But there were also members of the investor and executive classes.

“There were also garden-variety freaks, fruitcakes and lunatics. It’s fun to remember the site now, but back then, it was a mess. What started out as an outlet for tech industry workers devolved into a mosh-pit of post-9/11 political extremes.”

Lessard explains how, in some ways, the Netslaves website was a forerunner to modern tech startup sites such as TechCrunch, StartupSmart and Valleywag.

“We took the bitchiness of Suck.com and brought it to tech. TechCrunch and StartupSmart are definite influences in their willingness to question the sacred cows of the industry.

“But Sam Biddle at Valleywag, who criticizes West Coast tech cultist insanity from his Brooklyn perch, seems the closest to what we were doing as New York guys (and gals) with a digital axe to grind.”

A particularly notable contributor to the Netslaves website was freelance journalist and pioneering US political blogger Steve Gillard.

Gillard, who passed away in 2007, was cited by progressive blogger and Daily Kos founder Markos Moulitsas as a being a key influence on his work.

“Steve was a gentleman. He was an educated, honest person in a world where educated, honest people are in too-short supply. Steve appeared out of nowhere. First he was on the mailing list that was the precursor to the bulletin board, then he was sending us reams to stuff to publish, then he was posting even more material directly when we got ourselves a proper CMS.

“Steve brought history and a strong sense of social justice to what we were doing. He had no tolerance for the whole rich-kids-messing-around ethos of the industry because he was a moral person and a black dude from Harlem who had witnessed the consequences of such foolishness.

“I was so glad to see him taking off as a political blogger. My only regret is that he didn’t live longer to enjoy it.”

The problems with Web 1.0

Lessard recalls a common complaint from many on the site was that tech startups were often started by young people straight out of college, and the founders lacked basic management skills or training.

“It’s okay to get some pizza and code all night when you’re in college, but if you’ve got millions in venture and employees with bills to pay and some even with families and mortgages, it’s not a good look, particularly if the company is going to be out of business in six months. And your best option seems to be to get another job just like the one previous.”

Reclining upmarket office chairs by Aeron came to be a symbol of the tech startups that failed during the ‘90s tech crunch.

“In an industry that had rejected suits and ties and other traditional symbols of corporate power, the Aeron was the seat of power in the Web 1.0 ‘game of thrones’.