Lessons out of the Box: Aaron Levie on scaling and sales 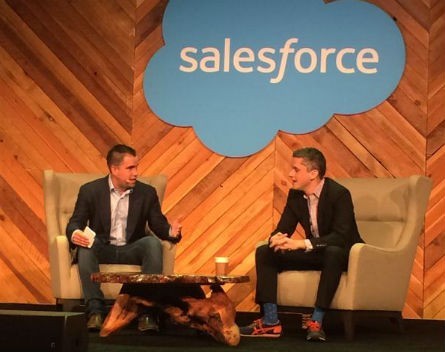 When scaling a company it’s important to balance two types of employees, those that have experience in the industry you’re disrupting, and those with fresh ideas, according to Box co-founder and CEO Aaron Levie.

Levie founded Box when he was in college in 2004, with friends Sam Ghods, Jeff Queisser and Dylan Smith. They were trying to solve a simple problem – how to access and share files from anywhere. It’s now one of the most dominant content management companies in the world, and employs over 1300 people.

The company’s mantra is simple – make mum proud, “unless your mum is evil” Levie clarifies.

Speaking at Salesforce’s Dreamforce conference in San Francisco, Levie says Box was fortunate to include among its early hires people who had experience scaling startups.

“They had seen what scale looks like and had seen where we were going to be in the future,” he says.

“But we try and mix that with individuals that haven’t necessarily learned all those particular and unique lessons that come with a different kind of point of view or perspective that doesn’t have any ‘baggage’.

“What’s really important is for the experienced individuals that you hire understand the reason they’re joining a startup is to do it differently.

“That allows us to constantly be inventing or reinventing the parts of our business that no longer makes sense.”

That reinvention began quite early in Box’s life. After beginning as business-to-consumer startup Levie says it quickly became clear that the way forward was with an enterprise business model.

Scaling an enterprise-focused is quite a different proposition to scaling one that’s consumer-focused. When Levie told his staff of the pivot, at that point around 10-15 people, they agreed it was the right move.

“Everyone was like well that makes sense, the other (business model) wasn’t working,” he says with a laugh.

“The next day everyone woke up and they worked for an enterprise software company.”

The pivot meant a sales team was needed, and again Box was fortunate. The type of salesperson that an early stage startup requires, according to The Enterprise Sales Learning Curve, a document Levie endorses, was already on staff.

“We were really fortunate because the first salesperson we hired was your classic renaissance salesperson. Which is what (The Enterprise Sales Learning Curve) calls for,” Levie says.

“You need somebody very early on who can play the role of product manager, marketing person, salesperson, who can actually figure out what it is you are actually selling and building.”

Levie says the key to staying nimble as a startup grows is getting great at micromanagement. Even with more than 1300 employees, Box’s product design process is exactly the same as it was when the company had just 15 people.

“You have to get really good at micromanagement at scale. You just have to be incredibly annoying all the way up,” he says.

“Our product management and design teams are 10 to 15 times larger than when I could manage them directly, but we still have to have the right kinds of check points, the right types of processes to ensure what is being delivered to the market holds onto our core values.

“If you don’t have that discipline, everyone will be doing the job the right way, as it was defined for whatever their role is. But you might not end up with a cohesive or coherent product.

“I think as a technology company the most important thing we do is build products. That’s the one process in the business that you can’t let go of.”