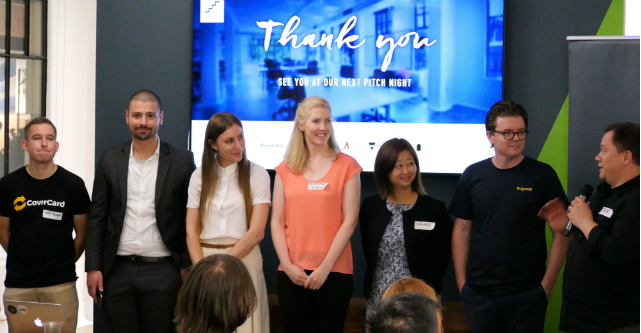 Melbourne co-working space Level 3 has launched its first B2B pitching night, giving startups an opportunity to present their ideas to a room of corporate executives.

With the aim of bridging the gap between startups and enterprise, Level 3 events and marketing manger Sarah Rudd says the aim of the pitch night was to give founders a unique way to meet corporates.

The dedicated events and meeting space connecting people in the tech startup community is an initiative of tech startup Versent.

“It’s our give-back to the community,” Rudd tells StartupSmart.

“We let all the meet-ups use our space for free and host events here, we also put on events for our partners and we run initiatives like this pitch night.”

All the startups received $US5000 in Amazon web services and the winner went out with $5000 from app developers Hyperapps, $2000 cash and a two hour coaching session with inventor and Unlockd co-founder Chris Kerrisk.

“It’s an interesting way the night was set up, of how startups can work with corporates and each of their different comfort levels in doing that,” Napthali tells StartupSmart.

In the audience were faces from NAB, BMW, GE Capital and other big businesses.

“They’re obviously interested in the startup space and innovation and looking to support that community,” Rudd says.

The next Level 3 pitch night will run in a few months.

“We’ll put a callout for nominations because ultimately, we want to be able to match the startups with the correct people,” Rudd says.

“We hope that a lot of startups will be interested now that people have tested out the waters that they’ll be a bit braver and courageous in coming forward.”

For startups planning to participate at the next one, Naphtali says startups should really think about the audience they are pitching to.

“Whether it’s an investor, a customer or an employee, define your value proposition and articulate it clearly in a way that you can win their hearts and minds,” he says.

“You want someone sitting in the audience to say, ‘I can see myself in that story or I can see that company servicing me.’”

Hanus says making this connection is crucial for him.

“To have people excited in what are great products is really important,” he tells StartupSmart.

Bugwolf founder Ash Conway took out another win on the night following his success at the CIO Summit Shark Tank this year.

Elzinga says what Conway and the runner up Foresight did really well was present a well-put together slide deck, demonstrating a thorough understanding of their content and making it relatable.

“They understood the beginning, middle and the end, they kind of took everybody on a journey and they were very confident in the way they presented that and that’s hard,” Elzinga tells StartupSmart.

But it’s not enough to have a good idea if you can’t sell it, he says, so events like these are a great place to start.