Malcolm Turnbull meets the next generation of Australian entrepreneurs at the inaugural National Lemonade Day: “Our nation’s future depends on the innovation and creativity of our children” 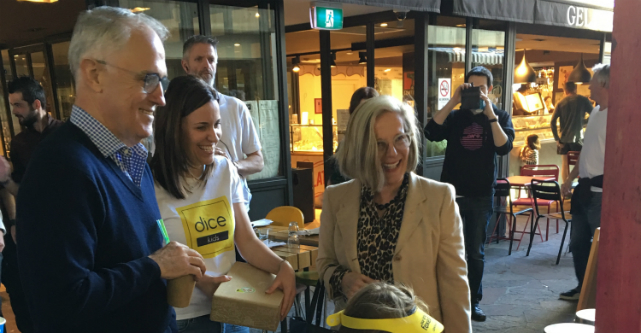 Coinciding with World Entrepreneurs Day, hundreds of young entrepreneurs around the country took their first shot at getting a product to market in an initiative led by Policy Hack winner DICE Kids.

“They were practicing things like saying, ‘I’m a little entrepreneur’,” Watson-Lynn tells StartupSmart.

“We told them about Lucy Turnbull and that she was a successful entrepreneur.”

As customers walked through, including their special guest Lucy Turnbull, Watson-Lynn was caught off guard when she saw who she brought along.

“Lucy is obviously engaged and passionate about this and bringing her husband along for the ride,” she says.

“It’s really great to have his support.”

Our nation's future depends on the innovation & creativity of our children, like little entrepreneur Zara @DiceKids pic.twitter.com/tz6EowJNVG

In the lead up to the weekend, Watson-Lynn teamed up with Our Little Foxes to deliver nearly 600 lemonade business boxes around the country.

“One girl’s logo was love hearts to show the drops of love that went into the lemonade,” Watson-Lynn says.

“The kids yesterday put together stands with things made from home, [that] was all factored into the costings.”

“What we really identified is that it’s not just about the kids it’s about the whole family coming together and working on the project,” she says.

One family, based in Queensland, ran a DICE Kids lemonade stand alongside a crowdfunding campaign for brain cancer research.

“They actually had one of their children pass away from cancer,” Watson-Lynn says.

“The other siblings decided to donate their lemonade [funds raised] to charity. This is setting some really positive messages on how business can have a nice impact on the world.”

With encouragement from the Turnbulls and the success of their first National Lemonade Day, Watson-Lynn says the startup will be continuing to drive forward on their mission to equip 180,000 children with DICE Kids’ business boxes in three years.

“We are going to scale this up,” she says.

“We think these boxes are a perfect way to do it because they can go anywhere [so] everyone from any community gets access to entrepreneurship education.

“People in Bondi have got access to this through schools, they’re the ones that have that privilege.

“We want to make sure that people in lower socioeconomic communities and rural and remote areas get it too.”