Business Planning, Growth, How I Did It, Technology

Marathon Targets ships robots to US for $50 million contract 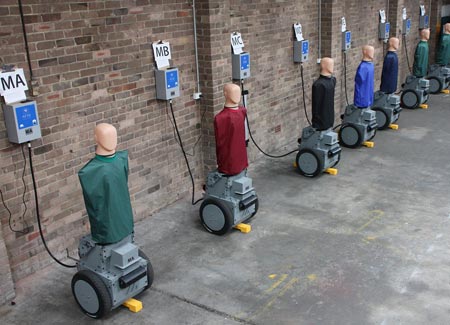 A batch of high-tech military robots created by Sydney start-up Marathon Targets has been shipped to the United States to help train Marine Corps, after the business won a US$50 million contract.

Marathon Robotics was founded by Alex Brooks, Alex Makarenko and Tobias Kaupp in 2007, all of whom hold PhDs from the Australian Centre for Field Robotics at the University of Sydney.

Last year, the company secured a US$50 million contract with the United States Marine Corps Systems Command to trial its technology.

Smart targets are armoured, autonomous robots that look, move and behave like real people. Their paths are unpredictable, and their human-like motion makes them realistic and challenging targets.

The robots can run day and night in all weather conditions, and have the ability to turn on the spot, change direction, navigate buildings, avoid obstacles and duck for cover when fired upon.

The robots have been endorsed by the US Foreign Comparative Testing (FCT) program, which tests market-ready technologies with the potential to support US defence requirements.

The five-year contract includes delivery of a smart target system for test and evaluation by the USMC, and options for the acquisition of additional systems.

The first eight robots have been shipped to Quantico in Virginia – the site of one of the world’s largest US Marine Corps bases – to be used for formal marksmanship training.

The USMC and other US agencies will be able to purchase smart targets as part of the contract.

“We’ve heard from customers around the world about the urgent need to improve moving marksmanship. Finally, shooters will be able to practice on smart mobile targets,” Brooks says.

“Over 90% of the Marines’ FCT projects go to production, so we are confident that agencies who want smart targets will be able to get them.”

Meanwhile, Makarenko described the multimillion dollar contract as a milestone not only for the company but for robotics in general.

“It took a phenomenal amount of engineering to bring this technology from the research lab to the field… This will be the first autonomous ground robots ever fielded by the US military,” he says.

Marathon Targets received help from NSW Trade & Investment, which assisted the company’s technology development and targeting of the US defence market.

According to Andrew Stoner, NSW Deputy Premier and Minister for Trade and Investment, the FCT endorsement will provide the company with an opportunity for further sales.

“Marathon Targets not only has a green light to sell its robots to the US Marine Corps but can also sell to other US agencies with an interest in marksmanship training,” Stoner said in a statement.