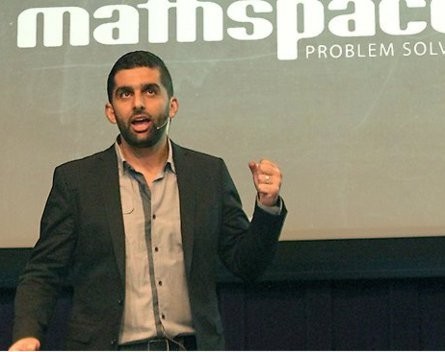 Mathspace, founded by Mohamad Jebara and Chris Velis, is a mathematics eLearning app, which “combines the textbook, workbook and mark book into a single online platform”.

The platform allows students to answer maths problems step-by-step and provides help if students get stuck along the way.

The cloud-based software is being trialed in 15 schools in NSW and Victoria. According to Jebara, four out of five iPad schools which have trialled the product have purchased subscriptions.

Mathspace beat 10 other start-ups to take out the title at Echelon Ignite: Australia, held in Sydney earlier this week. Among the list of competing start-ups was Airtasker and LawPath.

Echelon Ignite is a spinoff of Echelon, which claims to be Asia’s largest tech conference. As the Australian winner of Echelon Ignite, Mathspace will proceed to Singapore later this year to attend Echelon 2013.

There, it will be exposed to investors, mentors and industry leaders, whilst gaining insight into the latest digital, mobile and internet trends, and the direction of Asia’s tech industry.

Earlier this week, StartupSmart reported on the rise of Asia as the next Silicon Valley for Australian start-ups. Asia certainly appears to be the next step for Mathspace.

“I think, particularly with Echelon being an Asian thing, they really see the benefit of education and tuition,” Jebara told StartupSmart.

“So Singapore, for example, is only a third of the size – in terms of the population – of Australia, or maybe a quarter of the size, but spends 10 times as much on tuition.

“I think we were well placed with our product in the market that we’re sort of pitching to.”

Jebara says Mathspace is hoping to use Echelon 2013 as an opportunity to form strategic partnerships as it seeks to raise funds and make its mark on a global scale.

“We’re looking for strategic partnerships to help us get into more markets… In particular, the south-east Asian market is good for us,” he says.

“Obviously with Singapore being such a great market… with their internet take-up rate and the amount of mobile penetration, it’s just a really good test-bed to test our product and refine it and get it perfect ahead of a global launch.

“We’re in the middle of a raise right now and we’re basically only looking to take money from strategic investors that can help in some way with distribution globally or something like that.

“We’re basically half raised and half looking, but only from the right investors.”

Mathspace was awarded $20,000 in seed funding from Blackbird Ventures, an Australian-founded venture capital firm based in Silicon Valley.