Meet the man who wants to save journalism, one cent at a time 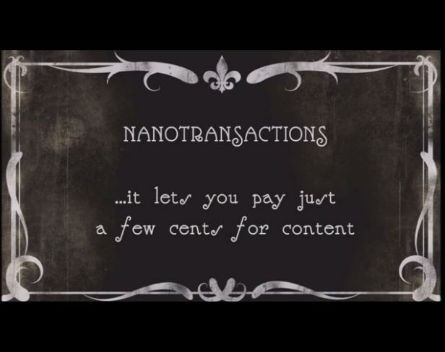 Monetising content is a major challenge confronting all media outlets, but one Australian entrepreneur thinks he may have found the perfect answer.

Nick Ross, the ABC’s editor of technology and games, has begun crowdfunding a project called Nanotransactions, which allows publishers and blogging communities to charge users a few cents to access each piece of content.

As with prepaid mobile accounts, Ross’ model sees users top their accounts using the online payment system of their choice, including bitcoin, to a minimum amount of $5.

Unlike current micropayment systems, which charge publishers up to 30 cents per transaction, the Nanotransaction model is envisaged to involve a charge of just one cent for an article with an access charge of up to nine cents.

While Nanotransactions would see users charged a few cents once-off to access an article forever, the same model could be used to provide pay-per-view videos or pay-per-minute access to content.

Ross told StartupSmart that Nanotransactions fulfils an urgent need for the media industry, which is desperate for a business model that can support quality online journalism.

“We lost the Global Mail, a publication employing long-form journalists, when its sugar daddy decided he was no longer interested. We almost lost New Matilda, which is now run by one person effectively as a charity,” Ross says.

“Then a few days ago we lost Delimiter, which covered politics and tech issues that no one else covers. That was run by just one person. It was a good living for him, but he was so overworked doing four long articles of his own every day of the week.”

The problem that comes about with the closure of a publication like Delimiter, according to Ross, is that it means certain issues are no longer covered, which in turn damages democracy.

As one of Australia’s leading tech journalists, Ross knows first-hand the problems faced by publishers.

“I was editor of PC Authority and left to do my own publications around 2008, when we launched four mags in a year – just at the global financial crisis hit,” Ross says. “They never lost money, they broke even… but I’d spend six weeks trying to sell the ads. Then the ABC editor job came up. It’s one of the most prestigious tech journalism jobs in the country, offering a full-time wage.”

While Nanotransactions could be used alongside either a paid advertising or subscription paywall model, Ross says there are deep flaws to both models

“A lot of people don’t realise newspaper websites charge less than $5 per 1000 views for advertising. That’s less than half-a-cent per article,” Ross says.

“Paywalls don’t work. They lock out 98% of pre-paywall traffic… Everyone who uses social media knows how annoying they are and they’re easy to get around.”

“Something needs to be done and no one’s doing it.”

Ross says he has received strong support from the startup community.

“I’ve spent a year on this so far, and it’s been quite amazing. I’ve already had to knock back offers,” he says.