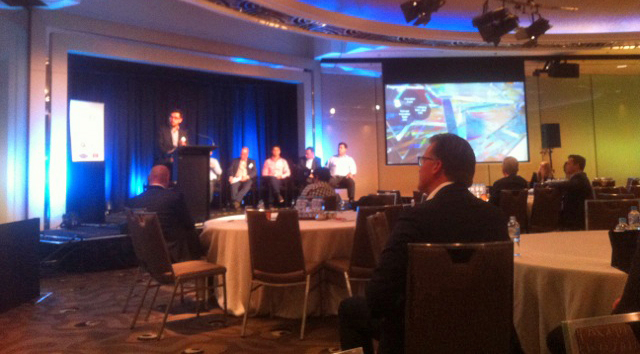 Bugwolf, a startup helping big businesses drive down costs in testing and debugging new software, products and technology, was the only Melbourne startup chosen to pitch to a judging panel including representatives from the ABC, Commonwealth Bank and Australia Post.

Bugwolf founder Ash Conway pitched to the room filled with innovation experts from the likes of CSIRO and Hyundai and says he was given the chance to meet smart leaders in the space he wants to expand into.

“It was a great opportunity to get in front of a lot our potential customers and get some direct feedback,” Conway tells StartupSmart.

Asia-Pacific accelerator Venturetec facilitated the competition and founder Trey Zagante says it was great to see such high enthusiasm from CIOs with many expressing interest to further engage with the startups that pitched.

“It’s a strong signal to the startup ecosystem that there is a willingness from the corporate sector to collaborate with and support the local startup ecosystem,” Zagante tells StartupSmart.

Judge and ABC tech director Ken Gallacher says his favourite startups on the night were the ones that inspired him.

“They were able to tell as a startup why [their solution] was important and why it would work, the others didn’t make that extra step connection,” Gallacher tells StartupSmart.

Having inspiration is critical for startups because of the incredibly difficult journey that lies ahead, he says.

“It’s also got to be real, you’ve got to see enough of the validation, putting yourself in the customer’s shoes to really feel the heartbeat of the problem,” Gallacher says.

With tech innovations quickly changing employment, skills and careers, digital entrepreneur Michael Priddis highlighted the need to share the excitement around startups and disruption with education and organisation planning in order to adapt to those changes.

“How do we help the taxi driver whose job has been innovated?” Priddis said at the event.

“Who’s going to pick up these people that have been displaced?”